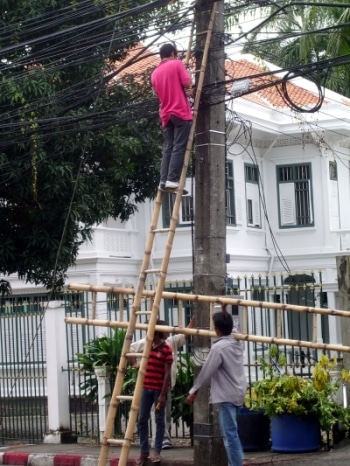 Power lines and cables have been installed underground along Thalang Rd and Soi Romanee in the Old Phuket Town area in the first part of a three-phase project intended to improve the appearance of the area, once the commercial and cultural center of the island.

The next step is to do something about the proliferation of cables along roads in surrounding areas.

The work must be carried out in stages as the entire project would require a huge budget that the municipality is currently “not ready to propose”, she said.

To bypass some of the budget constraints, the government agencies involved have coordinated their own budget requirements so that each can play their part in the carrying out the work, she said.

Telecommunication companies including TOT, CAT, TT&T are all taking part in the project.

The work that began on Saturday involves removing unused power lines and regrouping and tidying up power cables that are still being used along the full 1.4-kilometer length of Mae Luan Rd.

Three power poles that are no longer used will removed as well.

Mae Luan Rd was chosen as the starting point of the project as it is a main artery along which city dwellers travel to reach many of Phuket’s west coast attractions, explained Mayor Somjai.

After work along Mae Luan Rd is complete, the project will focus on Thepkrasattri Rd, Phuket Rd, Yaowarat Rd and Wichit Songkram Rd, she said.