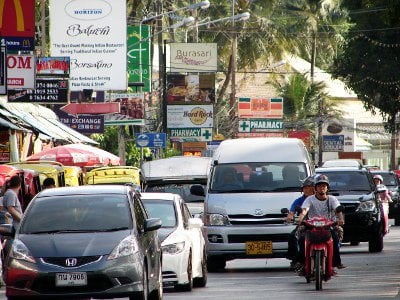 PHUKET: One-way traffic in Patong will be reversed, with traffic flowing north along Rath-U-Thit 200 Pi Road and south along the beach road, officials announced today.

However, Patong Mayor Pian Keesin said a date had yet to be set when the changes will be effected.

“We still have to decide on how the traffic will flow along the streets connecting the two main roads. We need more time to figure that out,” he added.

The announcement came this afternoon at a meeting set up to review the current one-way system following the conclusion of a three-month trial period.

The decision to reverse the main traffic flow in the resort town was unanimous among the committee members at the meeting, chaired by Vice Governor Weerawat Janpen.

“First, the junction to Kalim [at the north end of Patong] should have a circle [roundabout],” he said.

“Second, as Phra Baramee Road is the main road to go to Kamala and Kathu, traffic along that road should flow smoothly. People should be prohibited from parking their cars along the side of that road, or they should be restricted to parking on each side on alternate days.

“And third, traffic signs and pedestrian crossings all throughout Patong should be clearly visible to everyone,” he added.

Mayor Pian said the committee came to its decision to change the traffic flow out of concern for people’s safety.

“By law in Thailand motorists are normally required to drive on the left side of the road, and people are used to this. Tourists get in tuk-tuks, taxis and motorcycles on the left. We care for their safety. This change will help to reduce the number of accidents,” he said.

The traffic flow is expected to be introduced within three months, he added.

“I will work with Kathu Police to get it done within three months. It is impossible to make everyone agree, but at least finally some people agree to this – and it is the right thing to do,” he said.

He also suggested to the committee to consider the prospect of using tunnels as long-term solutions to alleviating traffic congestion at intersections with traffic lights throughout Patong.

Phuket Fun Fly is back