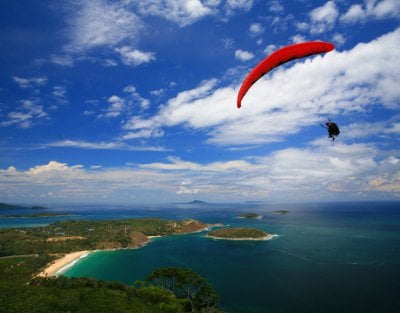 PHUKET: Phuket Fun Fly, the paragliding competition that captivated tourists and local residents alike in May last year, will return to the skies above Nai Harn Beach and Phromthep Cape from June 23 to 26.

Among the activities, to be held from 8am to 6pm each day, will be spot landing and fun fly competitions as well as beach activities on Nai Harn Beach.

The paragliding photo contest, which resulted in some of the most stunning photos of Phuket to date being published, will also return, this year branded as the Canon Photo Contest 2011.

“The event is being held to promote paragliding and as preparation for the Asian Beach Games in November 2014, as paragliding is one of the competitive sports in those games,” said Narong Promjitta, managing director of event organizer BMS.

“Currently, 40 paragliders have confirmed they will take part this year. I expect about 60 paragliders in total will join the event in June,” said Dr Prasert Theplaong, president of Phuket Paragliding Club.

Sky-high joyriders wanting to be taken for a “tandem ride” can register at a booth set up at Nai Harn Beach. The cost is 800 baht per flight.

The tandem rides take off near the wind turbines on Khao Daeng, just north of Phromthep Cape.