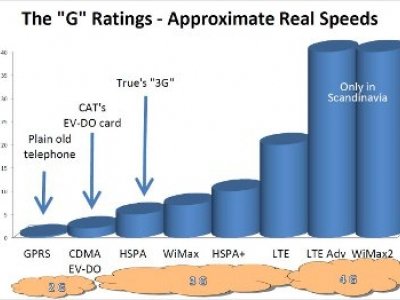 PHUKET: Anyone working in IT in Thailand should try very hard not to use the term “3G”. The scientific-sounding “3G” rates as a marketer’s dream come true. It reeks of sizzle and bling.

And, the way it’s being tossed about, it means absolutely nothing.

You would presume that 3G is better than 2G and not as good as 4G, yes? It ain’t so. It’s not true in Thailand, and it’s not true in the rest of the world, either.

A photo in my previous Live Wire column showed a CAT CDMA dongle – a USB “modem” that you plug into a computer that lets you connect to CAT’s CDMA/EV-DO signals.

The dongle is emblazoned “3G”. Only one teensy, tiny problem. CDMA isn’t 3G. At least, not according to the definition that’s widely accepted in the fragmented and inscrutable communications industry.

Look at the graph at the top of this page, and you’ll get an idea of the speeds you should expect from a 3G connection.

Some people say there’s no 3G in Thailand. That isn’t true. There are two stable, reasonably fast HSPA networks in Bangkok; one is owned and operated by TOT, the other is owned by CAT but operated by True, DTAC and a handful of smaller companies including iFox.

“But, but, but…” I can hear you say, “the Thai government has been trying to auction off 3G service, and there are lawsuits and competing governmental agencies that have blocked the auction.

“Thailand’s the laughing stock of the international communications industry – the only country with no 3G. Right?”

To understand fully what’s going on, the first thing to learn is that the Thai government owns TOT and CAT, and both derive a very large part of their income from mobile phone concessions. When you pay your mobile phone bill to AIS, DTAC or True, a very large percentage of what you pay goes to either TOT or CAT.

The very high concession rates were established many years ago, when governments could demand a whole lot of money for using the mobile airwaves.

CAT and TOT don’t want to lose their highly lucrative mobile phone concession. That’s likely to happen if HSPA takes hold. But that’s only a small part of the problem.

To read in depth the ins and outs of why 3G in Thailand is being held to ransom, stay tuned for Live Wire next week.

Able Wanamakok’s second Facebook 101 seminar is fully booked. Facebook 101 takes attendees through the basics, from setting up a business (or organization or charity) page, designing it, drawing attention to it, and then using the page to reach out to Facebook users.

Johan Lofgren helps with the more technical parts. No experience with Facebook needed to attend the free seminars.

The next set of three seminars run May 7, 14 and 21. To attend, sign up by going to www.facebook.com/SandwichShoppe and on the left click the link marked Facebook Seminar.

The seminars are sponsored by Khun Woody’s Sandwich Shoppes, AW PR and Marketing and onsite.in.th.

Able is planning a series of seminars in Thai, starting May 28. Email Able for details.

The next Computer Clinic will be on Sunday, May 1, from 10am to midday, at the Sandwich Shoppe Patong, near Andaman Beach Suites and the Patong Language School.

As always, the clinic is free and open to anyone interested in (or bothered by) computers in Phuket. There’s a lengthy question and answer period, and lots of help from kindred souls. If you have a question about computers in Phuket – or PCs in general – drop by and we’ll get you some world-class answers. The clinics are sponsored by the Phuket Gazette and Khun Woody’s Sandwich Shoppes.

I’m actively looking for someone to start an Apple Clinic. In a typical month, dozens of people approach me with questions about their Macs, iPads and iPhones.

The best solution would be to find an Apple fanatic – or an Apple dealer – who’s willing to give up a couple of hours a week to help other Apple users.

So far, I’ve heard of several Apple user groups that started in the past decade, but all of them folded for lack of interest. That’s amazing to me, because there are so many Mac (not to mention iPad and iPhone) users on the island.

My guess is that 90% of them don’t understand why “3G” on their iPhone or iPad runs so slow – and why it’s ridiculous to pay more for “3G” for use anywhere but the extreme west coast of the island.

If you want to help, email me: Woody@KhunWoody.com