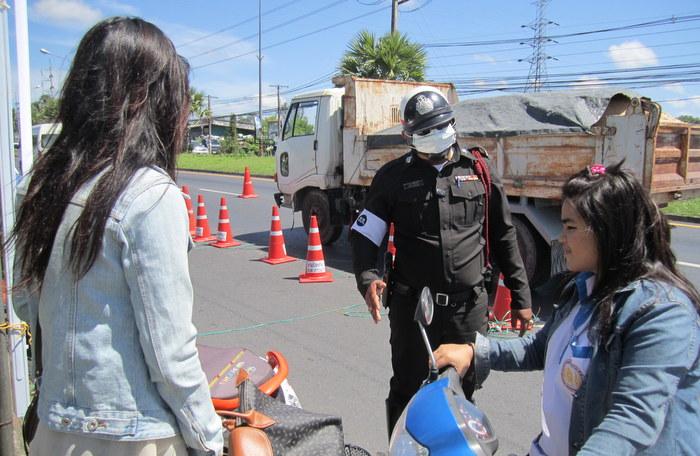 PHUKET: A road-safety campaign encouraging Phuket motorcyclists to wear helmets has been hailed a success in Kathu, where less riders are being arrested for not wearing protective head gear. The progress has prompted officials to extend the campaign at least until the Songkran break in April.

The ‘One District, One Road, with 100 Per Cent Helmets’ campaign was launched on February 1 as a one-month initiative. Helmet-less riders caught at checkpoints across the island had their bikes seized and then were escorted to the police station to view road accident videos, purchase a 99-baht helmet and pay a fine (story here).

During the first week of the island-wide campaign, 64 helmet-less drivers were arrested. The number of people being busted then jumped in the second week to 121, before it spiked to 222 in the third week.

“Just as the Governor said, the ultimate goal is to have zero helmet related arrests,” said Sirisak Skoonsorutcha, chief of the Department of Disaster Prevention and Mitigation (DDPM) Phuket Office.

“Despite the overall increase in the number of arrests on the island, we are seeing a decrease in Kathu as the campaign continues. This is a clear sign that community members are changing their habits and starting to wear their helmets.”

Kathu district’s statistics show a sharp drop from 58 arrests in the second week to just 15 in the third. Mr Sirisak said Kathu’s success was most definitely due to the push to have offenders watch the video clip.

“People are not really afraid of the law, but they do not want to waste their time, so they choose to wear a helmet instead. This is especially true for those going to work, because if they are stopped, they will be late,” Mr Sirisak said.

“With Songkran coming up, this will be an effective campaign to continue. Especially during the ‘Seven Days of Danger’, as it may help reduce the number of road deaths,” Mr Sirisak said.