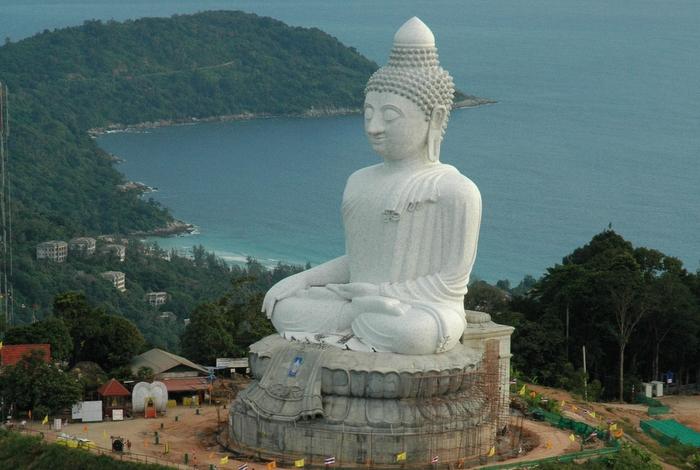 PHUKET: Despite photographs of Phuket’s Big Buddha appearing along side news stories about the seizure of land valued at 4 billion baht in the same area, the iconic statue will be unaffected by the Anti-Money Laundering Office’s (AMLO’s) investigation.

The AMLO transaction board resolved to seize a 45-rai plot and a 19-rai plot of land along Freedom Beach and in the Nakkerd Hills, on which the iconic statue resides, Seehanart Prayoonrat, AMLO secretary-general revealed on Wednesday.

“Just because some of the land seized overlaps with Big Buddha Hill, that does not mean images of the Buddha should be connected to the story,” said Suporn Vanichkul, president of the Mingmongkol Faith 45 Foundation, which is in charge of the image’s construction.

“I understand that the photo might have been used because it is an iconic statue marking the hills. However, it could give people the wrong impression.”

In 2012, the Big Buddha project faced allegations that construction had spread beyond the area outlined on its building permit, into the Khao Narkkerd Preservation Forest. However, the project was later cleared of all accusations (story here).

The 4bn-baht Freedom Beach case first came to light two years prior, when the director-general of the Royal Forest Department at the time, Somchai Piensathaporn, informed the Public Sector Anti-Corruption Commission (PACC) of irregularities concerning the issue of land title deeds for the two plots, which were originally reported to comprise a total of 65 rai.

The resulting PACC investigation unearthed high-ranking involvement from government departments in both Phuket and Krabi.

In July 2011, PACC Secretary-General Amphol Wongsiri stated that his investigation revealed that 200 million baht had been paid to officials for approval and authorization of the land deeds.

At the time, the evidence was being collected for onward transmission to the National Anti-Corruption Commission (NACC) in Bangkok.

In 2012, Pheu Thai Party spokesman and party list MP Prompong Nopparit paid a visit to the island to review the case.

“Looking only at the documents and title deeds, everything appears to be in order. However, an inspection of the land itself indicates that there is a conflict with several Phuket Ministry of Natural Resources and Environment regulations,” said Mr Prompong.

He explained that a site survey had proved that the land marked by the two Chanote titles, numbered 98414 and 98415, was within the boundaries of the Khao Narkkerd Preservation Forest.

“Another issue is that some of the land has a slope of over 35 degrees, designating it as a ‘mountain area’. The current title deeds do not apply to this type of terrain. In any case, title deeds cannot be issued for land within a protected forest. Any government officers complicit in this case are guilty,” he said.

The Land Department received a request in 2014 from the Royal Forest Department (RFD) to revoke the titles.

The lawyer defending the private investor in the case, At Srisamut, said that his client, Eakkachai Sae-Iw, had evidence that the land was acquired before the area was declared a national forest and that he could prove purchase of the land through a tax payment receipt – the lowest form of land claim available in the Kingdom.

“I stand by my words that the two plots are fully legal,” Mr At said. “I believe somebody wants to pick on my client, so they filed a complaint against him.”

Mr At did not elaborate on who might have targeted Mr Eakkachai for investigation, but did reveal that the land had been used to secure a mortgage of 400 million baht.

“The complaint is affecting my client, as people who are looking to buy the land have lost their confidence in making the investment,” Mr At said.

“And while this drags on, my client is responsible for paying the interest on the 400mn-baht debt. My client was going to build a resort on the land, but the project is on hold because of this complaint.”

However, Thammasak Chana, Land Department deputy director-general, explained that the ownership of the plots had been in question for years.

“The application to issue Chanote titles for the land was filed on July 18, 1990 by Panthong Na Ranong. Then, on April 12, 2011, the titles were issued under the name of Mr Eakkachai,” he explained.

Mr Panthong is currently being investigated by the AMLO, confirmed Col Seehanart on Wednesday.

He was arrested in Bangkok in 2003 for allegedly conspiring to falsify documents. He was the third person arrested in investigations concerning fake land titles in Phuket (story here).