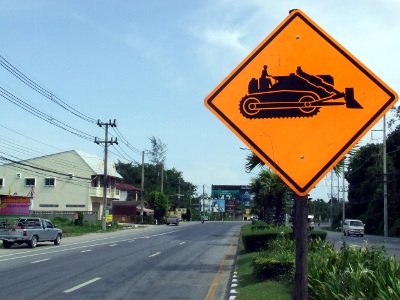 PHUKET: New road projects planned for Phuket and Phang Nga are budgeted at more than 140 million baht, the Highways Department has revealed.

Scheduled for major upgrades are the road to the airport, the road on the north side of the Sarasin Bridge and the bypass road.

“The road has been damaged by trucks carrying heavy loads into Phuket. The northbound lane is fine because it is used by empty trucks heading off-island,” said Mr Sathaporn.

Hat Yai PSM Construction Co has been contracted to complete the project within 120 days, from February 10 to June 9, with a budget of 19,248,900 baht.

Six heavily damaged sections of the road are to be structurally repaired before the entire length is resurfaced.

Work stopped from April 8 to17 for Songkran, but has since resumed, Mr Sathaporn said.

He is hopeful the work will be finished ahead of schedule.

“I would like to see construction finished before May 10,” he added.

The project became a top priority after community action group Khon Rak Phuket (People who Love Phuket) filed complaints to offices in Bangkok, which led to Bangkok officials traveling to Phuket to inspect the condition of the road firsthand, said Mr Sathaporn.

“We are trying to solve the problem. We have installed a weigh station in Khok Kloy, on the north side of the Thepkrasattri Bridge . The weigh station was installed before New Year [January 1] and was in use for three months before its official opening ceremony on April 1,” he explained.

Now any trucks carrying over 25 tons are asked to reduce the weight to that figure before crossing over to Phuket, he added.

For traffic heading off-island, 18mn baht has been allotted to upgrade the five kilometers of road from the new bridge under construction to Khok Kloy Bus Station in Phang Nga.

“These roadworks are scheduled to finish at the same time as the new Sarasin Bridge, so motorists will enjoy a smooth surface along the northern side,” Mr Sathaporn said.

Next on the list of projects is the 60mn-baht expansion of the airport road to four lanes from Thalang Technical College to the T-junction south of the airport, where traffic lights will be installed.

“This project has been approved by the Ministry of Land Transport. We are now waiting for the funds to become available,” Mr Sathaporn said.

“Work will probably start around July. The construction company will be Haadyai Rueang Chai Construction Ltd Partnership,” he added.

As part of the project a median strip will be installed to separate vehicles traveling in opposite directions. It is hoped the barrier will reduce the number of head-on collisions on the road, which has a reputation locally as a dangerous stretch.

“We will start work along the sections of road where accidents happen most often and continue the project if we get more funding in the next fiscal year [beginning October 1, 2011],” Mr Sathaporn explained.

Other roadworks on their way include a 43mn-baht upgrade along 12 kilometers of Thepkrasattri Road from Kosit Wiharn Temple in Rassada to the Heroines’ Monument.

“Upgrades to the northbound lanes will start around mid-July, as we expect to receive the budget for that first. The number of people rushing to the airport to catch flights has worn the road down and made it is slippery.

“While we are working on that, we will request the budget to repair southbound lanes damaged by trucks bearing heavy loads,” Mr Sathaporn said.

“People don’t understand why we always have do road construction. It’s because roads have limited lifespans, seven years at most. After that they need major improvements,” said Mr Sathaporn.