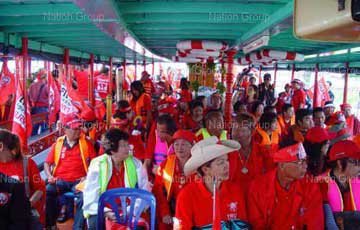 PHUKET: Phuket’s red shirts are determined to stay in Bangkok until the movement succeeds in bringing down the government, according to one of their leaders.

Soonthorn Tohmharn, a local leader of the red-shirted United Front for Democracy Against Dictatorship (UDD), said more than 10,000 southern red shirts had joined the demonstration since Friday, with more arriving today.

“I told people in my group, ‘if anyone wants to go home, let me know so I can buy you a ticket back,'” he said.

None of the group accepted the offer, Mr Soonthorn said.

The Phuket UDD members have a tent at Khok Wua Intersection, near Sanam Luang in Bangkok.

Mr Soonthorn said there was no violence in their area. “We’ve gathered peacefully,” he said. “I don’t think any yellow shirts will dare to go against us. Otherwise they will die because there are a lot of us now.”

Mr Soonthorn said he was confident of victory. “What I heard from my friend, a source in the Democrat Party, makes me believe we are going to win. He said the PM has to resign; otherwise this will not end positively.”

Although the media were reporting around 100,000 people had joined the demonstration, he thought the protesters could number one million, he said.

“We are all fired up. We can melt iron. I can’t tell what the result is going to be but I’m not afraid of what could happen to me and my life,” he said.

FC Phuket top of the league