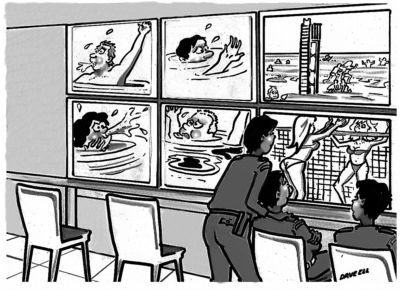 PHUKET: When it comes to showing visitors a good time, Phuket is hard to beat. But when it comes to keeping them safe, the verdict has to be: ‘Must try harder’.

Much has been written recently about the ongoing carnage on the island’s roads, but during the high season now ending we’ve heard less about Phuket’s second most prolific killer, the Andaman Sea.

News that the Phuket Provincial Administration Organization (PPAO) has again failed to attract bidders to station lifeguards on our beaches is an extremely troubling development. [See story in this week’s Phuket Gazette. Digital subscribers click here.)

An island competing with the world’s premier holiday destinations has no choice but to make beach safety a top priority. To have no lifeguards on any beaches at all – the state of affairs here since November – is unforgivable.

Most of those deaths happened while lifeguards, employed by previous contract holder LP Laikham, were stationed on the beaches, including Karon.

LP Laikham’s contract was not renewed, amid accusations that it failed to pay wages and provide its guards with the requisite equipment.

Now, no companies appear willing to take on the contract, despite the PPAO sweetening the deal.

If the PPAO must find more money to attract a bidder, so be it. The consequences of having no lifeguards during this year’s monsoon do not bear thinking about.

The much-maligned jet-ski operators, along with tuk-tuk drivers and tailor shop touts, often get the blame for soiling Phuket’s image. But now, in the absence of any beach guards, the ‘jet-ski boys’ have become Phuket’s primary lifesavers.

Everything must be done to ensure that reputable, well-equipped professionals are playing that role instead, and as soon as possible.

But the issue does not begin and end with lifeguards.

Many of the tourists who drowned in Phuket last year entered the water in spite of red warning flags and the protestations of lifeguards.

A well-funded danger awareness campaign would save lives. If that message can reach tourists before they arrive in Phuket – announcements on all incoming flights are worth exploring – so much the better.

Meanwhile, drowning remains one of the biggest killers of Phuket’s local children. Their lives are taken not just by the sea, but by canals and the old tin mine ponds scattered around the island.

Phuket is an island. Teaching the kids how to swim – a task neglected by the education system – should be mandatory.

We have the death sentence for murder and drug offenses, but it’s time to stop applying that penalty against swimmers at our beaches.

OPINION: Reports of My Death