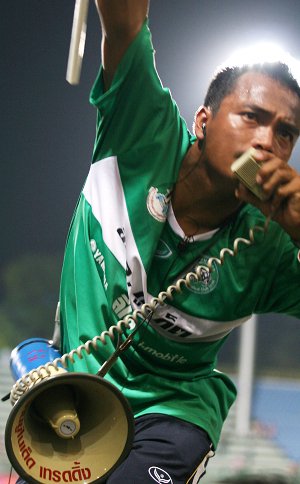 Even more encouraging for FC Phuket fans – who turned out in record numbers to support their team at Surakul Stadium – was the manner of the performance, with the Sea Kirin dominating the game from start to finish.

The 0-0 draw against Phattalung earlier in the season has also been changed to a Phuket win after the Kirin complained Phattalung had contravened regulations on the use of foreign players in the match.

According to reports in the Thai media, FC Phuket are also making similar appeals against Phang Nga and Chumphon, the only other two teams to have taken points off them this season.

Saturday’s win saw Anurak restored to the starting lineup at the expense of the injured Chakrit, who scored the goal in the previous week’s 1-1 draw with Chumphon.

New signing Camara made his debut in midfield, taking FC Phuket’s contingent of players from the Ivory Coast up to three.

Satun Utd had won three of their opening four games and looked set to provide the sternest test yet to the new look FC Phuket’s promotion credentials.

It was a test FC Phuket would pass with flying colors, controlling possession and never allowing their opponents time to settle on the ball.

In the opening half, the raucous home support was disappointed as their team failed to convert early superiority into clear-cut chances, with teenager Adisak volleying the best opportunity high and wide.

Anurak, who has undoubted ability but a tendency to drift in and out of games, came closest when a speculative 35-yard free kick cannoned off the crossbar.

FC Phuket finally got the goal their performance merited soon after halftime, when ‘man-of-the-match’ Diarra Ali converted a tough shot from close range.

Anurak missed a golden opportunity to seal the win moments later when he headed wide of the goal and it was left to Adisak to finish the task with his third goal in as many games.

FC Phuket Coach Arjhan Songgamsub could not conceal his delight. “It was a very good result and I am also very happy with the performance today. Satun Utd were top of the league but we were much better than them today and I think we showed we are capable of making the promotion play-offs,” he said.