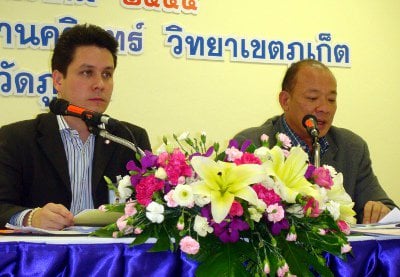 PHUKET: The Cabinet provisionally agreed to fund 117 of the projects proposed at the Cabinet meeting, at a total cost of about 84 billion baht, Deputy Government spokesman Chalitrat Chantarubeksa announced today.

“Ten of the projects are Andaman-wide projects at a cost of 24.8bn baht. The remaining 107 projects are from the individual Andaman provinces,” Mr Chalitrat said.

Phang Nga received approval for 13 projects with an estimated cost of 3.8bn baht.

Ranong had 11 projects approved for an estimated cost of just under 4bn baht.

Trang, presenting only six projects, was given provisional agreement for a modest 334 million baht budget.

“All the projects will be ratified in order to be presented to the The Bureau of Budget within two weeks of the approval of the Cabinet, after which the 2012 financial budget can be allocated,” Mr Chalitrat said.