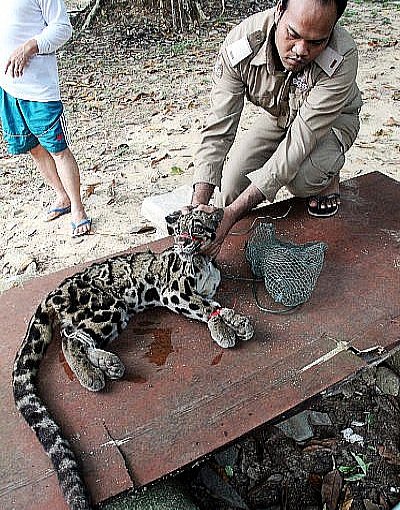 PHUKET: A clouded leopard was captured over the weekend after a dip into the poultry-house on Thanyamundra’s organic farm in Phang Nga, which produces much of the chemical-free produce served in Phuket.

Security guard Surasit Wangphakam was responsible for the capture. Hearing chickens “clucking loudly” inside the poultry-house, he looked inside to discover a female cloud leopard “playing” with the chickens.

Fifteen of the chickens had already been killed by the time he put a stop to it, said the 28-year-old.

“It is just a clouded leopard, not a dangerous animal. She came to hunt the chickens, but didn’t eat any of them. This is the first time I have had to catch an animal while on duty here. Once in a while, I see elephants, deer and monkeys,” said Mr Surasit.

Nicknamed Khun Sod, he has been working at the farm for eight months under contract with Siam Guardian Services (SGS).

It took Mr Surasit about three minutes to get hold of the feline, which was not afraid of humans.

“She seemed humble, as if she was caught doing something naughty act,” wrote Thanyamundra Marketing Communications Manager Nathaphat Asavathanachart.

“However for security reasons, Mr Surasit tied her mouth and legs and put her in a cage,” she explained.

The henhouse is part of the organic farm at Thanyamundra Khao Sok, part of an organic resort in a natural setting that is listed in DestinAsian’s “Luxe List 2011”.

“This has clearly shown the abilities of the well-trained of SGS guards,” wrote Ms Nathaphat.

The leopard was then released back into Khao Sok National Park, its original habitat.