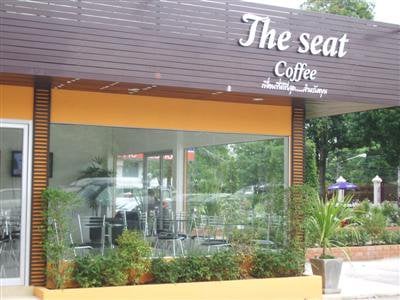 All profits from the shop will be shared by Phuket City Police officers, supplementing their low official salaries.

For our original report on the scheme, click here.

Sirasuk Tasaeng-rung, The Seat’s assistant manager, said the official opening had yet to take place.

“It will be soon,” he said. “We’re still waiting for Col Wanchai. He’s looking for an auspicious time and date.”

The Seat is air conditioned, with large TVs, sofas and photos of Old Phuket Town on the wall.

Mr Sirasuk said decoration work was about 70 percent complete and would be completely finished in three or four days.

“Most of the customers so far are police officers or people visiting the police station,” Mr Sirasuk said. “We’re expecting more after the opening ceremony, including college students. We might provide a special promotion for them, such as a student discount.”

Black coffee, cappuccino, espresso, latte and mocha are all available, costing not more than 50 baht each.

“It doesn’t have a name yet, but many people like it,” he said. “It has a really nice smell,.”

In the future, the Seat may serve Thai and Western dishes.

Phuket Open: All Thai teams out