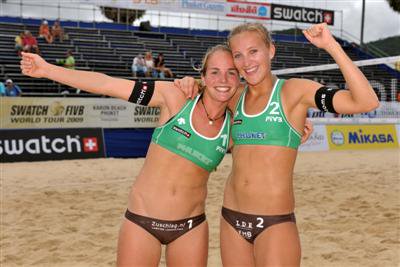 KARON, PHUKET: All five Thai teams in the FIVB Phuket Thailand Open volleyball tournament have been eliminated from competition.

Defending Phuket Thailand Open champions Jen Kessy-Boss and April Ross of the US opened defense of their title by defeating 32nd seeds Julaluk Radarong and Manerat Udomchavee of Thailand 21-15 and 21-13 today.

More bad news for the Thais came when the 24th-seeded Chinese pair of Ying Huang and Xi Zhang upset number nine seeds Jarunee Sannok and Usa Tenpaksee (19-21, 21-16 and 15-11) in 58 minutes.

With that result, all five Thai teams entered in the tournament have fallen by the wayside, including two that failed to qualify for the main draw.

For updates in the exciting event, which is sponsored by the Phuket Gazette, click here.

Better yet, get out there and watch some games live.  Admission is free of charge.