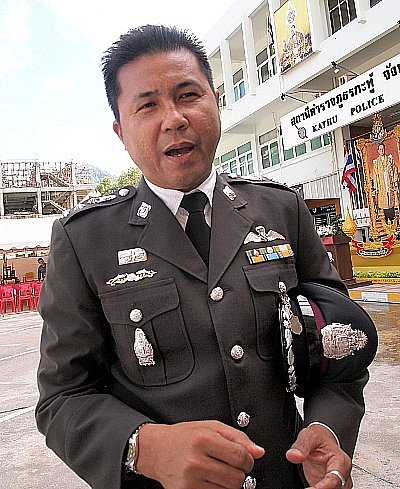 “Usually, there are a lot of robberies during the high season. We don’t really have enough officers to take care of all the tourists during peak season,” explained Patong Police Superintendent Arayapan Pukbuakao.

The recruitment of motorcycle taxi drivers, jet-ski rental operators, beachfront shop owners and other people who work along the beachfront as Civil Protection Volunteers is part of Patong Police Station’s plan to gear up for November.

“I plan to recruit about 50 volunteers to help keep watch in Patong. Whenever volunteers see something wrong, they can report it directly to the police, who will be there right on time – before anything worse happens,” said Col Arayapan.

“Currently, we have only 16 functioning cameras along Soi Bangla. Originally we had 36 cameras in the Patong area, but many of them are not working,” Col Arayapan explained.

He added that more powerful “pan-able” cameras were needed in three locations that had never been monitored with CCTV cameras before: near the Kalim Police Box, the Patong Hill intersection and along the road between Patong and Karon.

“We need only standard CCTV cameras in other areas, and about 100 cameras in total to cover the whole Patong area,” said Col Arayapan.

The installation of the CCTV cameras and the recruitment of beachfront workers as volunteers is expected to help police monitor Patong and make it more tourist friendly, he added.