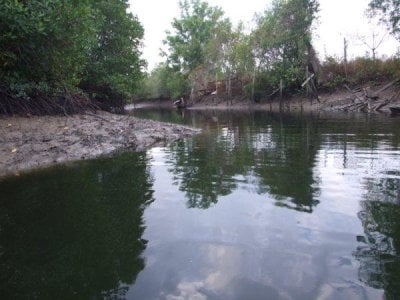 PA KHLOK, PHUKET: Villagers are complaining that shrimp farms in Ban Tha Rua in Phuket are poisoning the canal their livelihoods depend on.

Surasak Wahlum, a 55-year-old fisherman, said, “The wastewater kills shellfish and other marine life in the canal, so we cannot do our jobs.”

Wirot Suksamrit, also 55, said wastewater was released into the canal twice a year. “It takes a long time for the water to return to normal and for fish to return to the canal,” he said.

President of Pa Khlok Tambon Administration Organization (TAO) Athipong Kongnam said the TAO had warned the shrimp farmers about the practice before.

“They promised to clean the water before they released it into the canal, but they still do it secretly,” he said.

Mr Athipong said there was nothing much the TAO could do to stop the operators. “The farms are located in Tambon Srisoonthorn and there are no organizations there taking responsibility,” he said.

“We’ll just have to report it to the police,” he added.