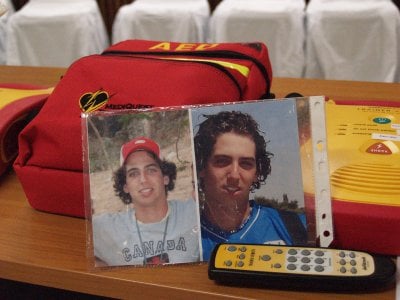 PHUKET: The family of a young Canadian man who died in a freak accident in Patong six years ago have donated six Automatic External Defibrillators (AEDs) to Phuket hospitals and rescue foundations.

Noah Yelizarov, 19, died as a result of electrical shock on October 9, 2004. He was in Phuket on holiday with three friends.

Standing knee-deep in flood water alongside a road in Patong, he was electrocuted when exposed wires on an electric pole sent a deadly charge through the pool.

Noah died on the way to the hospital.

His death could have been prevented had a defibrillation been administered.

In an effort to prevent similar tragedies on Phuket, the Yelizarov family raised the 25,000 Canadian dollars (794,000 baht) needed to buy the six AEDs for the island’s medical services.

The family presented the AEDs and a host of other medical equipment to Vice Governor Tri Augkaradacha on March 19 at Patong Hospital.

Michael Yelizarov, Noah’s father, said he was grateful for the warmth the Thai people had shown his family on their donation trip.

The AEDs would ensure there would be fewer parents suffering the loss of a child, he added.

Holding one of the AEDs Mr Yelizarov said the device was capable of 150 electrical charges.” That means 150 people could be saved with just this one machine,” he said.

“I would like people to be aware that if we can help change things, this can be a safer place,” she said.

The Yelizarov family donated one AED each to Vachira Phuket Hospital, Thalang Hospital, the Kusoldharm Foundation, the Phuket Rescue Foundation and two to Patong Hospital.

All of the donated AEDs will be used in mobile emergency medical units.

Also present at the ceremony were five officers from Firefighters Without Borders, there to train 150 local medical personnel how to use the equipment.