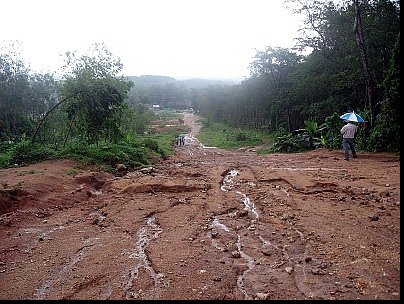 PHUKET: Phuket Vice Governor Somkiet Sangkaosuttirak has given local government 30 days to confirm whether or not the clearing of a plot of land in Srisoonthorn, Thalang District, was legal.

The news follows V/Gov Somkiet’s inspection of the site yesterday, after a complaint was filed with the Phuket Governor’s Office.

“The person who filed the complaint said he had previously filed a complaint with the Thalang District Office, but received no reply,” said V/Gov Somkiet.

“He also gave additional information that alluded to local government officers being involved in this case,” he added.

Joining V/Gov Somkiet at the site, a plot near the hills in the Baan Manik area, were officers from the Phuket Office of the Ministry of Natural Resources and Environment and the Phuket Land Office.

“The man who filed the complaint said he saw four tractors digging up the land as if it were being prepared to facilitate construction at the top of the hill,” explained V/Gov Somkiet.

He added that an initial investigation had uncovered a Chanote title deed for part of the land in question.

“But we found that the area that was levelled is outside the area covered by the Chanote,” he added.

However, V/Gov Somkiet confirmed that the investigation was only just beginning.

“The landowner might have other land documents that could represent possession of the area, so I have assigned officers from the Land Office to verify whether or not the developer has the correct documents to prove ownership of the land,” he said.

V/Gov Somkiet added that he had also instructed officials from the Phuket Natural Resources and Environment office and from the Srisoonthorn Tambon Administration Organization (OrBorTor) to investigate whether or not the developer had been issued a permit to level the land.

“Officers from the Phuket Provincial Forestry Office have also been assigned to verify whether or not the land in question is in a protected forest area,” he added.

“The representatives from those organizations have to report the results of their investigations to me in 30 days. If we find that the clearing has been carried out illegally, we will arrest [the culprit],” the vice governor said.

International crime-fighters to meet in Phuket