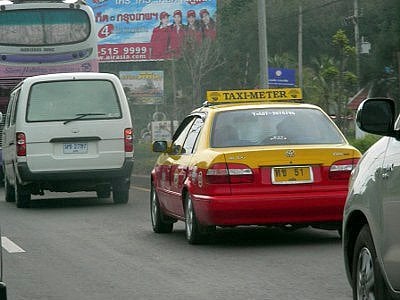 The move to boost the fleet at the airport comes as part of the company’s negotiations to renew its concession. PTM’s current concession is set to expire on September 30.

PTM, one of three taxi companies that serve passengers at the airport, claims that the current number of metered taxis available is unable to meet demand, as five to 10 cars are under repair daily.

“All taxis at the airport should be metered taxis in order to create a recognized standard for their management,” said Phuket Land Transport Office (PLTO) chief Teerayut Prasertpol.

Phuket Vice Governor Chamroen Tipayapongtada used the meeting as an opportunity to outline a code of conduct and basic standards with which the company needed to comply.

“The quality of the cars being used as taxis at the airport must be improved. The drivers should also have polite manners and be well dressed,” said V/Gov Chamroen.

A metered taxi from the airport to Patong should cost about 450 baht.

However, the Tourist Police representative at the meeting, Capt Siramed Thanaphansiri, alleged that the metered taxis were often overcharging passengers.

“Measures must be taken to prevent metered taxi drivers from charging their passengers an extra 200 to 300 baht per trip,” he said.

But Dulyatham Rawungdee, a representative from Airports of Thailand (AOT), the public company that operates Phuket Airport, denied that there was an issue with metered taxis overcharging at the airport.

“We have not received complaints of metered taxi drivers charging more than the price on the meter,” he said.

“Of course, if we do get complaints, we will inform the PLTO, so they can warn the offenders or – in case of repeat offenders – even consider cancelling the registration of the offending driver’s car,” he added.

V/G Chamroen also used the meeting to voice the complaints of “lots” of private organizations about the entrance to the airport being clogged by taxis.

“Even the hallway, where people are waiting for passengers, is crowded with taxi drivers, tour agencies and people picking up their friends – it’s chaotic,” he said.

“The airport needs to fix the problem, because it is the first impression tourists have of Phuket,” he added.

The meeting concluded with Mr Dulyatham agreeing to send a report that included the suggestions presented to the AOT head office on Bangkok.

When the report is returned to the Phuket International Airport it will be handed over to Phuket Governor Tri Augkaradacha before the committee and the PLTO will be able to decide if the extra 30 metered taxis are necessary.

Phuket probe given 30 days to report on land clearing