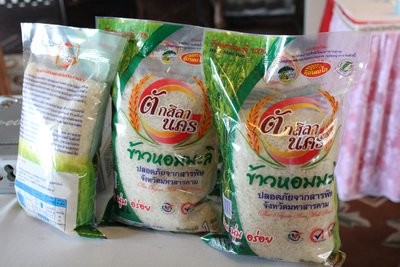 PHUKET: Trade representatives from Phuket and Maha Sarakham have entered into bilateral negotiations centered primarily on the supply of scented jasmine rice from the Northeastern Thai province.

Marking the start of a promising commercial alliance, the development was highlighted by the signing of a trade memorandum at the Pearl Hotel in Phuket Town on Tuesday.

The general terms of the agreement outline the nature of future trading of the staple, in which producers and distributors in Maha Sarakham agree to supply scented jasmine rice and related products to buyers in Phuket on a regular and contracted basis.

A secondary, more general clause of the agreement states that signatories agree to strengthen business links between the provinces by opting to exchange and trade other products and services.

Presiding over the meeting, Maha Sarakham Vice Governor Suthinan Bunmi explained that the drafting of the memorandum was complementary to a government project, funded from the current fiscal year, aimed at assisting the development of rice-market operators in Maha Sarakham.

“Maha Sarakham realizes the importance and benefits of integrating and working with partners. By signing this agreement, we are building a business network and alliance that will foster the exchange of trade knowledge and experience.

“Moreover, [we are] creating a product distribution network between our two provinces that will open trade and develop and link businesses, enabling agricultural institutions and other private sector organizations to be strong, self reliant and sustainable,” he explained.

The officials and representatives from Isarn were among tens of thousands in the past two weeks who had travelled from across the country to Phuket – most of whom had come to partake in the 28th National Youth Games, held on the island from May 24 to June 5.

In the closing days of the grand event, Maha Sarakham was announced as the host of next year’s Games.