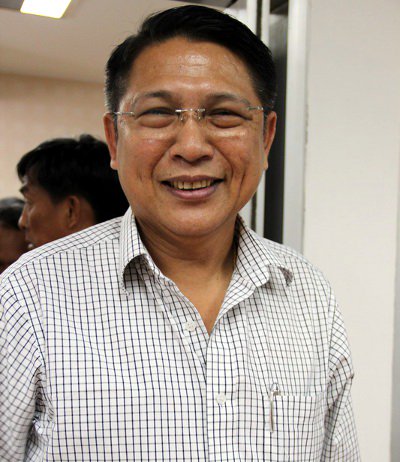 PHUKET: Regional Provincial Police commanders have ordered Phuket police to “hunt down” the men who gunned down reporter Wisut “Ae Inside” Tangwitthayaporn in broad daylight yesterday.

The deputy commander of Police Region 8 arrived in Phuket to personally handle the investigation into the assassination of reporter Mr Wisut yesterday morning.

Maj Gen Pisan said the assassination was a very grave development, as it not only cost the life of a well-known reporter but also raised security concerns for all media on the island.

During the meeting Maj Gen Pisan ordered investigators to hunt down the hit men and bring them to justice. Police already have images of the assassins recorded by CCTV camera as well as additional evidence that should be enough to identify them, he said.

Police have also invited Mr Wisut’s widow, who was in the car at the time of the attack, to give eyewitness testimony.

Maj Gen Pisan said he was assigned the case by Region 8 Commissioner Lt Gen Santi Pensute, who views it as very important.

“I was assigned to monitor and follow the case because it involves a reporter who presented facts to the public in order to protect the environment. Unfortunately [it appears that] ‘Ae Inside’ had to pay with his life to the person who lost out on the benefits,” he said.

Investigators will be divided into two units. The first will hunt the assassins and the second will scrutinize possible motives, he said.

Police suspect the motive is related to the issuance of land title deeds, either at Freedom Beach in Patong or at Nakalay Beach in Kamala, as improprieties in these cases were exposed by the late Mr Wisut’s political journal Inside Phuket.

However, police have yet to rule out possible conflicts relating to romantic or gambling issues.

Police are currently collecting as much evidence as possible from CCTV cameras and eyewitnesses.

“We are questioning eyewitness who got a good view of the incident, as well as Mr Wisut’s wife. We also have video images from a surveillance camera taken at the moment the two assassins shot Mr Wisut. I believe the assassins are professional hitmen who planned for this for quite a while,” said Maj Gen Pisan.

The murder is one of the highest profile assassinations in Phuket since former Phuket Land Office Deputy Director Pongtorn Hiranyaburana was shot dead on the way to his home in Surat Thani in April 2003.

Before his murder, Mr Pongtorn was ordered by Thaksin Shinatwatra, the prime minister at the time, to conduct a probe into the illegal issuance of land titles in Phuket. The investigation was officially shelved the following year.

Wisut’s wife, Jiraporn Hosakul, his father and other family members claimed his body from Vachira Phuket Hospital yesterday. The body is now at pavilion 2 of Kajonrangsan Temple on Ranong Road in Phuket Town, where the cremation ceremony will be held.

Phuket Governor Tri Augkaradacha, together with Phuket Provincial Police Deputy Commander Chalit Kaewyarat and Wisit Jaiard of the Pheu Thai Party in Phuket went to the temple at 3pm yesterday to pay their final respects to Mr Wisut.

The date of the cremation ceremony will be made after his mother arrives from another province.