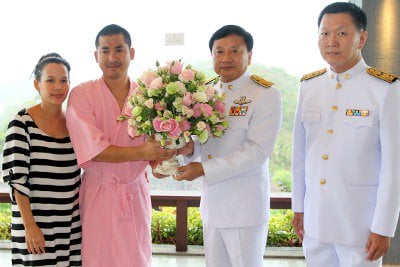 His release was followed by another gift of flowers, this time from HRH Crown Prince Maha Vajiralongkorn.

The Royal bouquet was presented to Pla-wan and the Issara family yesterday afternoon by Phuket Governor Tri Augkaradacha.

Mr Vorasit, who had been hospitalized following a vicious gang attack during the early hours of January 4, is reportedly recovering from his injuries.

Although he can walk by himself his lower right leg remains held at the correct angle by a heavy bandage to allow the injury to the tendons to heal properly.

Mr Vorasit’s recovery is being closely monitored by a nurse from Bangkok International Hospital.

Of the Royal gift, Mr Vorasit said tearfully “It is such an honor for me and my family to have received this gift of mercy from HRH Prince Maha Vajiralongkorn and HRH Princess Srirasmi.”

“I am now getting better,” he said and added, “I am sorry for what occurred, I did not mean for it to happen.”

Sriwara Issara, Mr Vorasit’s mother said, “My lawyer is dealing with all matters in this case. I am still afraid that the attackers’ friends will be back to attack my son.

“Governor Tri said he would take care of my son’s security to not let it happen again,” she added.

Phuket police ordered to “hunt down’ “Ae Inside’ killers

Great day to be a kid in Phuket