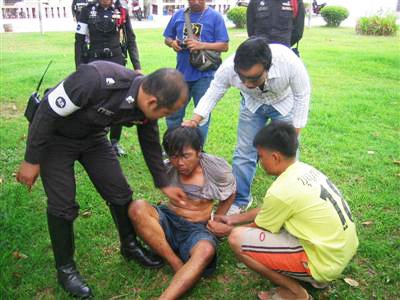 PHUKET: Chalong Police are seeking a foreign tourist whose credit card and Norwegian driving license were recovered during the arrest of an alleged serial thief over the weekend.

Chalong Police Inspector Sutham Rattanasawangwongse received a tipoff at 5:30pm on Sunday that 40-year-old Sombat Supprasit was spotted riding a motorbike without a license plate near Nong Harn Lake in Karon.

Mr Sombat, who had once been arrested for robbing a tourist at Kata Beach, was waved over by officers as he passed the entrance to Soi Kok Tanode in Kata.

Rather than pulling over, the suspect sped up before ditching the bike at a 7-Eleven store and scaling a wall.

Some of the officers pursued on foot while others checked the vehicle, which had a Nikon camera in the front basket.

Mr Sombat was caught in a wooded area near Patak Road Soi 1.

A check of the motorbike’s serial number revealed that a man named Jatuputti Maiphanich had reported it stolen to Thalang Police on April 7.

Chalong Police contacted Mr Jatuputti, who came to the station and identified the green Honda Dream as his own.

Mr Sombat denied stealing the motorbike, saying he bought it from a friend in Koh Kaew for 4,000 baht.

Chalong Police were skeptical and charged Mr Sombat with theft.

Meanwhile, Chalong Police and the Norwegian consulate are trying to track down Norwegian national Lundsrun Morten so that his credit and ID cards can be returned.