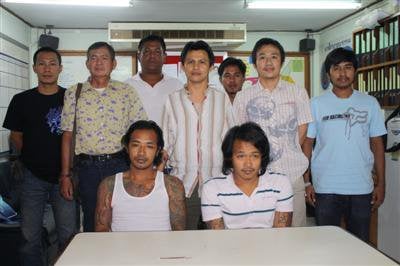 Both are Ratchaburi natives.

Mr Anurak was picked up later the same day at Vachira Phuket Hospital in Phuket City.

After their arrests both men confessed to their involvement in an armed robbery and murder of a victim in Ratchaburi last year, police said.

A third brother who was allegedly with them at the time was arrested earlier.

After their arrests, both men confessed to their involvement, police said.

The brothers told Chalong Police they were sleeping in the home of a man identified only as ‘Jo’, who woke them up and asked them to come along in a car ‘if they wanted to make some money’.

The trip ended with the murder of the intended victim, with the four men allegedly dividing up the spoils: four bahtweight in gold and four thousand baht in cash, police said.

The brothers were held in a cell at Chalong Police Station until they were returned to Ratchaburi by officers from the Ratchaburi Muang District Police.

The charges against them include armed robbery, conspiracy to commit premeditated murder and multiple charges for the illegal possession and use of firearms.