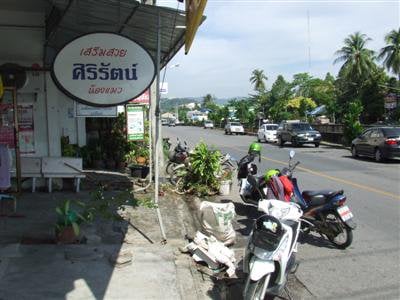 PHUKET CITY: A man drove a pick-up at high speed into an elderly monk and a man donating alms on his 23rd birthday early this morning, killing both.

The pair were standing on Takuapa Road, across the canal from the Silver Hotel in Phuket City, when they were run down.

After the accident the driver stopped the truck and fled the scene on foot.

Luangpor Samarn, a monk from Udon Thani based at Thavornkunaram (Saensuk) Temple on Ong Sim Phai Road, died at the scene.

Rescue workers from the Kusoldharm Foundation, based just 100 meters away, rushed Mr Grissada to Vachira Phuket Hospital, but he died on the way.

An elderly lady who witnessed the accident from the nearby ’99’ wet market said Mr Grissada had told her he wanted to make merit on his birthday by donating food to a monk.

Mr Grissada, a native of Uttaradit province, was employed at a local nightclub, she said.

When the truck appeared from around a curve, Luangpor Samarn was reciting a blessing for Mr Grissada, who was wai-ing back, she said.

“I feel so sad to see the monk lying dead soaked in blood on the road,” she said. “He came to the market every day to collect alms.”

The truck was moving very fast, making her suspect the driver was drunk, she said.

The pick-up is being kept at Phuket City Police Station while police are searching for the driver.

The area where the tragedy took place is a center of the Phuket City nightlife scene, with many massage parlors, pubs and snooker halls located nearby.