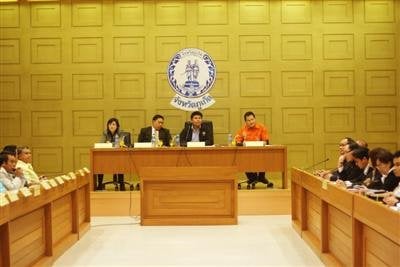 PATONG, PHUKET: Phuket’s jet-ski operators are going all out to mend their industry’s grubby image on Thursday, when a ride on any of the island’s 200-plus jet-skis will be entirely free of charge.

The message they hope to send out: Phuket’s jet-skis are no longer a rip-off.

The Phuket jet-ski industry made headlines earlier in the year when foreign diplomats complained to the Thai government that Phuket jet-ski operators were extorting money out of tourists.

A solution to the scam – in which operators demand large amounts of money from tourists for spurious ‘damage’, or grossly inflate repair fees – appears to be in place.

Nearly all of the island’s jet-skis are now insured under a compulsory insurance scheme and bear diamond-shaped stickers to prove it.

That is what Phuket Governor Wichai Phraisa-ngop told members of the Parliament’s Foreign Affairs Committee at a meeting to discuss the issue at Provincial Hall on Friday.

Mr Torpong said the committee was in Phuket to examine tourism problems that have damaged Thailand’s international image – especially the footage of JJ and its appearance on YouTube.com – and to find ways of mending that image.

Gov Wichai told the committee the jet-ski problem had been solved by the compulsory insurance scheme.

The scheme would be officially launched on Thursday, when all of the island’s jet-skis will be brought to Loma Park on Patong Beach, he said.

Starting from 9am and throughout the day, all jet-ski rides will be free.

For obvious reasons, those seeking a safe and peaceful swim on the day are advised to go elsewhere.

Mr Torpong said he was glad to hear the problem had been solved, but that the insurance scheme alone was not enough to repair Phuket’s reputation.

Local authorities needed to take legal action against the producers of Big Trouble In Tourist Thailand, and to report the case to YouTube.com, he said.

This, he hoped, would lead to the removal from the site of the damaging clips, which he said had now been viewed by more than one million people.

“They’re much more concerned about political conflicts that could lead to airport closures,” he said.

Also discussed at the meeting was the variable price of boat tours.

Phuket Tour Boat Association President Kissada Pichetpongsanon said standard prices should be set for all tour boats operated off Phuket in order to end overcharging for trips – as well as over-discounting.

Phuket MP Rewat Areerob agreed to have further discussions with Mr Kissada on the subject.