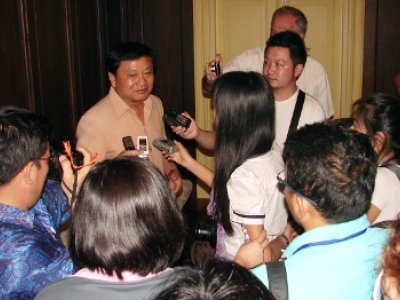 PHUKET: Phuket Governor Tri Augkaradacha this afternoon met representatives from 19 major news agencies from around the world as part of the Thai government’s drive to boost medical tourism revenues to 100 billion baht (US$3.3bn) by year 2015.

Among the representatives visiting the governor were journalists, photo-journalists and cameramen from Fox News and Xinhua as well as state-news agencies VNA from Vietnam and Bernama from Malaysia. Others hailed from as far as Norway.

The media troupe arrived in Phuket today from Bangkok for a two-day familiarization tour of the medical services and wellness treatments available on the island.

Governor Tri took the opportunity to introduce the group to what he called “vacation plus”.

“People can come to Phuket for much more than a holiday. They can undergo medical treatments or enjoy our spas. There’s so much more here that they can do than just go to the beach,” he said.

The media tour is just one of many the national government is hosting. Last month a similar media tour went to Chiang Mai. Another one next month is scheduled to visit Chanthaburi and in June another media tour group will visit the three border provinces in the South.

Phuket features prominently in the government’s national plan to develop the country’s competitiveness in the medical tourism world market.

According to a press release from the Thai government Public Relations Department (PRD), medical tourism generated 52 billion baht in revenue for the country in 2008, 58 billion baht in 2009 and 65 billion baht last year.

Thailand receives about 1.5 million medical tourists a year, but that number is rising, said the release.

Japan, the US and countries in South Asia were identified as main source markets, supplemented by arrivals from China, Taiwan, the UK, Germany and the Middle East.

Among the information given was the fact that Phuket has seven hospitals (a number most likely including the yet-to-open PPAO Hospital in Rassada), with 1,051 beds and 21 public health clinics in addition to many private clinics and drugstores.

Leading the group tour in Phuket is Chamnong Pakaworawuth, Director of the PRD’s Media and Information Management Division.

“Media tours such as this are good in that they let foreign media see for themselves how developed Phuket is and to learn what is available on the island.

“Spreading this information in their home countries can lead to more foreign investment and more tourists visiting Thailand,” she said.