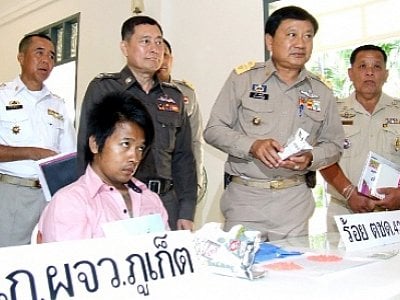 PHUKET: A man was arrested by Phuket authorities yesterday while trying to smuggle onto the island 2,000 ya bah (methamphetamine) pills hidden in Vitamilk cartons.

At a press conference to announce the arrest today, investigating officers told the Phuket Gazette that the total street value of the haul was about 800,000 baht.

An informant tipped off Phuket patrol police that Tianchai Chiewchan, 27, was carrying the pills from Surat Thani to Phuket in a van.

The officers identified Tianchai as he got out of the van based on a description provided by the informant and noted that he “was acting suspiciously”.

As they approached the Surat Thani native, the DDPM officers identified themselves and searched his belongings. Upon discovering his stash, the officers arrested him.

Tianchai confessed that the he had been paid 5,000 baht by someone in Surat Thani to deliver the pills to “Mr Ian”, an unidentified Thai man in Rawai, police said.

Tianchai was charged with possession of illegal drugs.