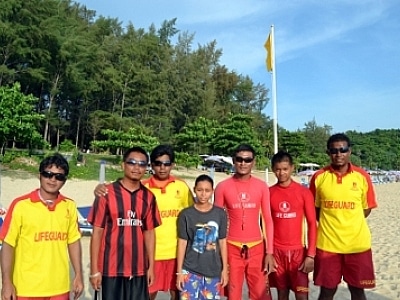 PHUKET: A South African man is spending tonight behind bars in Phuket after being caught stealing from tourists at Nai Harn Beach today.

The man, who police named as 27-year-old Steven Standen, was grabbed by lifeguards after a beach operator spotted him stealing a digital camera from a bag belonging to Australian tourists frolicking in the water.

“I saw him walking nearby and thought he wanted to rent a sunbed, but instead he sat on the sand behind the back row [of sunbeds] for a while,” said beach vendor Thairat Mulcol.

Two foreign ladies then came and rented beach beds in the front row. After the ladies finished applying sunscreen, they went into the water, he said.

“The man took off his shirt and also went into water for a while, but when he came back he sat down on the sunbed the ladies had rented.

“I saw him take a camera from the one of the ladies’ bags and hide it under his shirt as he walked off, so I called out to the lifeguards to stop him.

“We all surrounded him to stop him walking away. As soon as he saw this, he raised his hands and gave himself up. He also handed the camera back to us,” Mr Thairath said.

“My friend and I were swimming for about 20 minutes. While I was facing out to sea, I heard someone blowing a whistle. I turned around and saw a couple of people waving to me and calling me back to the beach,” said one of the Australian tourists, who asked to be named only as “Lisa”, age 29.

“When I saw him, he confessed that he stole it and apologized to me,” she said.

With her camera back, Lisa said she did not want to press charges.

“I just want to tell the beach vendor and lifeguards who helped me that I am very grateful for what they did. Otherwise, if the camera was stolen, I would never get those photos back again,” she said.

However, Chalong Police Duty officer Attharat Suwanarat told the Gazette that Mr Standen will be charged in court tomorrow.

Whether or not Mr Standen lives on Phuket or is just on holiday could not be established, as he told police he had lost his passport, Lt Attharat told the Gazette.