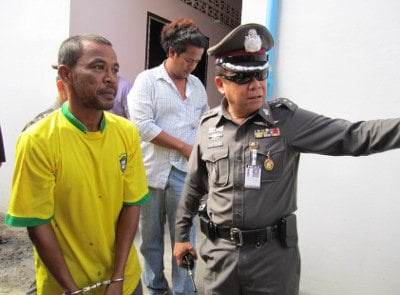 PHUKET: Thung Thong Police today held a re-enactment of the assault that resulted in the death of Kamonchai Suwanin, 38, from Nakhon Sri Thammarat, on Sunday evening.

The suspect, Arak Kraisap, 38, from Nonthaburi, confessed to police that following many arguments he stabbed Mr Kamonchai in the throat outside their apartments, opposite the 7-Eleven store on Wichit Songkhram Road near the Caltex gas station in Thung Thong, Kathu.

Thung Thong Police Capt Sakchai Chunyong told the Phuket Gazette, “I received a report around 9:30pm on Sunday night, that Mr Kamonchai had been seriously wounded during an argument at an apartment in Kathu.

“The victim died en route to Vachira Phuket Hospital and the suspect has been charged with premeditated murder and will be transferred to the court holding cells today,” Capt Sakchai added.

Mr Arak said during the re-enactment “He picked fights with me many times. I have no idea why he wanted to fight me that bad. That night I was in my room with my wife and he knocked on my door and called me out for a fight again. When I opened the door I saw he was carrying a knife, so I went to get a knife from my room.

“Then he went back to his room to get a gun. I ran out of the building, calling to Dow, my wife, and to let other people witness that he was threatening me,” Mr Arak explained.

“Dow called me in and I walked to back to our room, but he was standing there holding a knife and pointing a gun at my chest, so I stabbed him once in the throat.

“Then I ran away to get rid of the knife, which I hid near the Cikan Salon across the street [from the Caltex gas station] on the way to Patong Hill,” he said.

“I do not have any arguments with any other people – just him,” Mr Arak added.

Thung Thong Police Superintendent Kraithong Chanthongbai told the Gazette, “The two had problems for a while because the victim liked to drink and Mr Arak, a Muslim, did not. This was the cause of the fighting between them.

“Eventually it led to Mr Arak stabbing Mr Kamonchai in the throat with a 10-inch knife,” he added.

Police arrested Mr Arak at the Pip-In Hotel in Phuket Town at 5am yesterday.

“He was about to leave Phuket that morning,” Col Kraithong added.