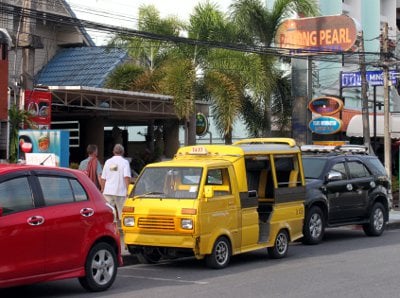 PHUKET: A 25-year-old woman from the Philippines has escaped serious injury after falling from the balcony of her sixth-floor Phuket hotel room late last night.

Rescue workers from the Kusoldharm Foundation in Patong told the Phuket Gazette that they received a call notifying them of the incident at about half past midnight.

The rescue workers arrived to find Jardeliza Samireh lying in the dirt in the vacant plot behind the Patong Pearl Resortel in Soi Sawatdirak Road.

Ms Samireh apparently fell from the hotel room balcony, landed on top of the glass roof the hotel’s spa at the back of the building, then bounced over the fence wall behind the property and into the vacant lot.

She suffered only a broken left leg in the dramatic fall.

Staff at the resort confirmed that Ms Samireh checked in to the hotel with a male friend on Friday.

“Police nearby rushed to the scene and we found that Jardeliza wearing shorts and a spaghetti-string top, lying on the ground floor over the hotel wall,” the staffer said.

“The ambulance arrived and rushed her immediately to Patong Hospital,” she added.

Capt Jakkrapong Luang-aon of the Patong Police said that he still investigating the incident.

“We are still not sure what exactly happened, but we are looking into it,” he said.