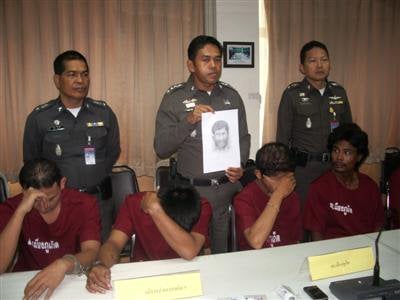 PHUKET: Police on Saturday announced the arrest of the third suspect wanted in connection with the June 26 shooting murder of 17-year-old Witarn Chuaykuea at a Phuket Town gas station.

Narongchai “Tan” Boonprom of Nakhon Sri Thammarat, arrested earlier, confessed to shooting Mr Witarn in the face with a sawed-off shotgun in a fit of jealous rage.

He claimed that Mr Witarn had been “hanging out” with his ex-girlfriend, who Mr Narongchai had broken up with about two months earlier.

For our original report on the fatal attack on Mr Witarn, click here.

At the press conference on Saturday, Mr Watcharin said he did not know the other two men would attack the youth when he was asked to join them.

All three men arrived at the gas station on the same motorbike.

Mr Watcharin maintained that he was not involved in the fighting that led to the shooting.

Numerous witnesses could be called to testify with regard to Watcharin’s claim, as the shooting took place early Saturday night at one of the busiest gas stations in Phuket.

Readers call for charity for family of Phuket murder victim