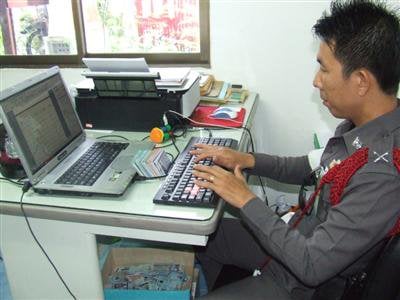 PHUKET: It was ‘standing room only’ at Phuket City Police Station this morning as hundreds of people caught on motorbikes without helmets crammed into the fourth-floor meeting room to watch a movie showing graphic images taken from road accident scenes.

The viewings are all part of the Phuket City Police effort to enforce a long-ignored traffic law requiring all people on motorbikes – including passengers – to don a safety helmet.

The crackdown, announced in April, was set to take effect from July 1, at which time police were to begin fining anyone caught on a moving motorbike without a helmet.

However, faced with the enormity of the task before them, police have decided to extend the public awareness campaign a few months, during which time offenders will have their licenses seized.

Offenders will only have their licenses returned after they have viewed the locally-produced movie with graphic images showing in detail that a fast-moving human skull is no match for asphalt.

This morning’s viewing, which began at 10am, had about 200 people crammed into the meeting room. A second showing was set to take place immediately after the first, with 195 people waiting to attend the one-hour viewing that included a safety talk and opening ceremony.

All of the reluctant audience members were caught at one of three ‘mobile’ police checkpoints that have been in operation in the district since Saturday.

Officers at the Phuket City Police Traffic Division say at least three checkpoints will be set up daily to nab offenders, quite possibly making the documentary one of the most-watched movie productions on the island in upcoming months.

Police don’t need to travel far to rope in an audience; among the locations where checkpoints have been set up are at the Muang District Office intersection and on Thepkrasattri Road near Phuket Wittayalai School.

Both are easy walking distance from the station.

Traffic Police Officer Phaisan Rodthieng said that the effort would also include shaming offenders and possibly setting them up for admonishment in the home or workplace.

“We will record all of them and inform their schools or the companies that employ them. The schools will cut their student’s behavior grades, while companies will issue warnings to their employees.

Police have asked many large organizations to take part in the effort and have had good cooperation so far, he said.

The public awareness phase will probably continue for two months until everyone knows about the law. After that police will begin fining offenders, he said.