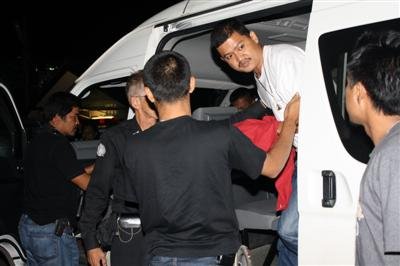 Police initially suspected romantic jealousy as the motive for the murder, as the victim was known to be having a relationship with 36-year-old Boonruen Buasi, a married woman.

Mrs Boonruen, who was with the victim at the time of the shooting, immediately reported his murder to police.

About half an hour earlier, police had arrested his alleged accomplice, 27-year-old Weerawat Sonsuwan.

Mr Weerawat was apprehended as he was arriving to work at the nearby Chumphon Hospital.

The nature of his work at the hospital has not been reported.

Both men have already confessed to charges of conspiracy to commit murder.

Mr Weerawat has also been charged with two arms violations.

Police have not yet determined which man actually pulled the trigger.

The key piece of evidence leading to the arrest was CCTV surveillance footage of the two men passing though the Tah Chat Chai checkpoint about an hour after the shooting, Maj Jarun said.

Patong floods: no end in sight