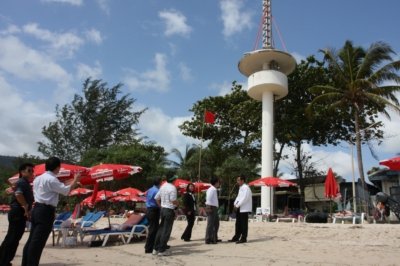 The man behind the new warning system, Dr Smith Dharmasaroja, is preparing to launch the ‘parallel’ national tsunami warning system on December 26, the fifth anniversary of the Indian Ocean tsunami disaster.

Dr Smith said the foundation has the same objectives that the NDWC was founded upon.

The new foundation will have as its deputy board chairman former Irrigation Department director Pramoj Maiklad.

The new foundation will be called the Foundation for National Disaster Warning System of Thailand (NDWST) and would use volunteer technical experts and community radio stations to help warn the public of impending disasters, Dr Smith said.

Dr Smith is a harsh critic of the current work and administration of the NDWC, which is now under the Ministry of Information and Communications Technology.

He is currently in a legal battle with the NDWC over allegations previously made about their work, he said.

As head of the Meteorological Department ten years before the 2004 disaster, Dr Smith was ignored and ridiculed for warning of the dangers of a tsunami along Thailand’s coastline.

After the disaster, he was appointed by then Prime Minister Thaksin Shinawatra to head up the NDWC, which was initially under the Prime Minister’s Office.

A parallel network is required to protect people in risk areas from a variety of disasters including landslides, storm surges and flooding, as well as tsunamis, he said.

The NDWC is willing to work with Dr Smith’s foundation after its launch, he said.

“We are happy to exchange information with any group that is working for the public benefit,” he said.