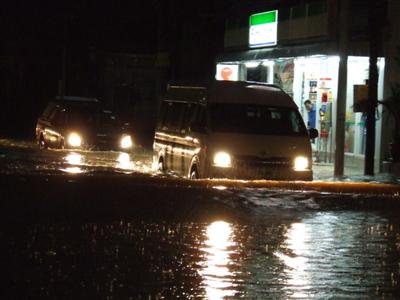 PATONG, PHUKET: In the latest developments on the Nanai Road flooding saga, the Patong municipality says a new pump is set to be installed under the road.

However, disgruntled local residents will have to wait until next year for the project to be completed.

Problems first began in April this year, when heavy rains caused floodwater three-feet deep to collect, wreaking havoc on the 50-meter stretch of road since nicknamed “the Nanai River” by locals.

The affected stretch runs roughly from the Aroonpat Village housing estate to the Chang Residence Hotel. The affected area varies in size with rainfall.

Despite numerous appeals from locals in the area, the Patong municipality has yet to find a permanent solution to the problem.

The municipality’s director of engineering, Sompon Kuanyuen, said the flooding problem is due to the actions of one local resident.

“There is currently a court case pending between two property owners in the area,” he said.

Mr Sompon claims one of the property owners blocked a drain pipe that used to channel rainwater into the nearby Pak Lak Canal, which feeds into Pakbang Canal and, evenutally, Patong Bay.

The most recent heavy flooding, which occurred last week, saw many motorcyclists having to push broken down bikes through the filthy flood water.

Meanwhile, the municipality has appointed Lertpong Tanamanset as the new director of sanitation.

He is determined to fix the problem, said Mr Sompon.

“We have just drawn up plans to install a new pump under that section of road,” Mr Sompon said.

“We expect the budget for the project will be approximately 3 million baht. Hopefully it will be completed next February,” he said.

Two other chronic flood problem areas in Patong are along the Patong-Karon road, in front of Simon Cabaret, and at the back entrance to Soi Sansabai, where it intersects with the unfinished Phang Muang Road.