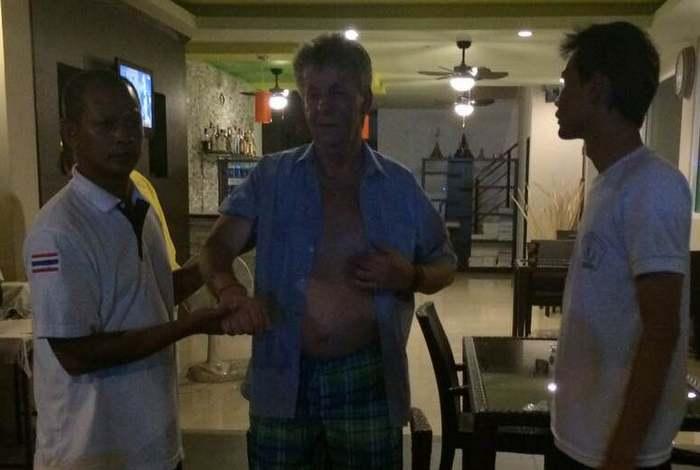 PHUKET: Police are hunting a Phuket motorbike gang member who attacked a German tourist and a Thai woman in Rawai early this morning.

Siegfried Kiesl, 58, told police that he was crossing the Rawai beachfront road with three friends – a German man and two Thai women – when a young man racing on a motorbike crashed into him.

“Mr Kiesl said there were maybe seven or 10 bikes with about 15 people racing down the road. He was knocked over and slightly injured in the incident. Rawai Municipality staff arrived at the scene, but he told them that he didn’t want to file a police complaint because he was a tourist,” Maj Thada Sodarak of the Chalong Police told the Phuket Gazette.

The gang then followed the truck Mr Kiesl was driving back to his hotel. Police declined to name the hotel.

“When Mr Kiesl and his friends arrived at the hotel, they were trapped inside the truck as the teens surrounded it. They started to bash the vehicle and broke one of the mirrors,” Maj Thada said. “Eventually, one of the women got out to try and speak with them, but they attacked her.”

The woman, who police declined to name, was allegedly kicked and thrown against the truck. The violence was brought to an end when a hotel employee spotted them and came to the woman’s rescue.

“Though the teens were able to flee the scene, we have CCTV footage showing their faces and motorbike licence plates. Some of them are Chalong teenagers – we recognize their faces and will apprehend them as soon as possible,” Maj Thada said.