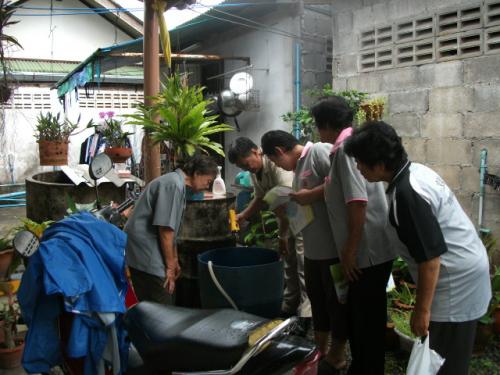 PHUKET: The Phuket Governor has branded his new strategy to combat the spread of dengue fever in Phuket with the lucky number 333, representing a sustained campaign of “three days, three weeks, three months”.

After witnessing a sharp increase in the number of people contracting the disease in the past three months, Governor Maitri Inthusut yesterday called on communities across the island to step up the fight against dengue .

He also urged the Phuket Public Health Office and local authorities to keep an eye on the rapid spread of dengue fever in their areas.

“According to Health Office statistics, 323 people contracted dengue fever between January 1 and April 17 this year. The number is more than six times greater than the number of people who contracted dengue during the same period last year,” he said.

The rise in the number of dengue cases was most prevalent in Phuket’s Thalang District, covering the north of the island, followed by Kathu District and Muang District, respectively, he added.

“To prevent the spread of dengue, local organizations must use the ‘three days, three weeks, three months’ strategy in their areas,” the governor ordered.

Under the 333 campaign, local officials have three days to identify possible dengue patients in their areas and have them brought to a hospital for treatment.

“If the doctor confirms the patient does indeed have dengue, then the village where the patient lives has three weeks to get rid of all potential sources of Aedes aegypti mosquito [which carries the disease]. This will continue for three months,” Gov Maitri explained.

The three days of identifying possible dengue sufferers will start tomorrow and conclude on Friday.

“Public Health officers will check for suspected dengue patients in every community,” the governor said.

“First, remove or cover all sources of unused standing water to prevent mosquitoes from laying eggs in them. Second, regularly change the water in baths, flowerpot plates, dishes and so on. Third, add Abate sand granules to all uncovered water sources. Fourth, clean up areas around the house and throughout the community to make sure there are no unknown sources of standing water. Fifth, clean water bowls and water containers regularly,” he said.

Dr Bancha explained that symptoms of dengue fever can include severe headache, joint and muscle pain, diarrhea, vomiting and skin rash, which may appear over the body three to four days after the onset of fever.

“More serious symptoms include bleeding from the nose, mouth, gums and under the skin,” he said.

“There is no specific medical treatment and no vaccine for dengue infection. The best way to protect against dengue is to avoid mosquito bites,” he added.

“See a doctor immediately if you think you may have dengue,” he advised.

Dr Bancha explained that his officers will launch a dengue public-awareness campaign, starting with Thalang District, the hardest hit area in Phuket.

“We will explain to residents how to protect themselves from contracting dengue fever. Later, we will continue our campaign in Kathu and Muang Districts,” he said.