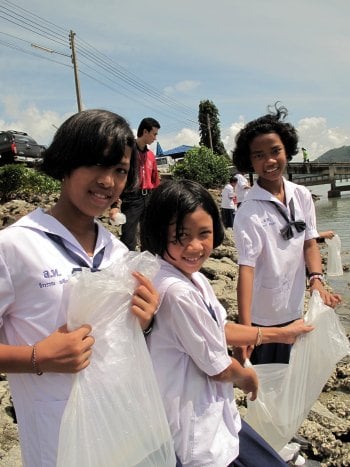 The event, led by Phuket Governor Wichai Phraisa-ngop, was held at the Phuket Coastal Fisheries Research and Development Center at Laem Sai in Pa Khlok, which raised the spawn that were released into the wild by students, local residents and guests.

The aim of the project was to increase stocks while raising awareness of the species and their importance to mangrove habitats.

Banana prawns cannot be commercially farmed. They tend to die en-masse or grow slowly, making it difficult for the farms to raise them for a profit, he said.

“It is better to release their spawn and later have local fishermen catch them in the wild,” he added.

“They are unlike tiger prawns, which can be easily bred and raised in farms. When tiger prawns are too old to sell, they are released into the sea [to breed],” he explained.

The project follows that of the Prachuap Khiri Khan Coastal Fisheries Research and Development Center, which has succeeded in breeding milkfish, Mr Kavi explained.

“They release the fish into the sea in order to help local fishermen who catch them for a living,” Mr Kavi said.

“They gave us the immature milkfish, which we raised in our farms. We are trying to increase the number of milkfish, but it takes time to study the related marine biological [requirements] in detail,” he added.

Along with other Fisheries Department officials from across the country, Mr Kavi is in Bangkok today to attend the department’s annual celebration of National Fisheries Day.

Activities will include the presentation of awards to officers with outstanding contributions and to officers retiring this year.