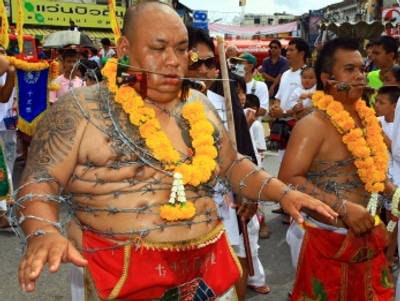 PHUKET: Promising signs are emerging for Phuket’s upcoming high season, as reservation rates have reached 50% for the upcoming Phuket Vegetarian Festival, the Tourism Authority of Thailand (TAT) has announced.

Wanaphapar Suksombul, Deputy Director of the TAT South Region 4 in Phuket, believes the October 8 to 16 Vegetarian Festival will help the 2010-2011 high season get off to a good start.

The Phuket “high season” nominally begins November 1, about the time when the monsoon season begins to abate in Phuket and chilly weather begins to set in across the island’s primary inbound markets in Europe, North Asia and North America.

Other upcoming events this month, including the Quicksilver Thailand Surf Competition at Kata Beach (September 22 to 26) and the Tourism Association of India Conference at the Banyan Tree at Laguna Phuket (September 24 to 27), also play an important role in drawing tourists in advance of the upcoming high season, she said.

Such events will help market Phuket as a prime destination, encouraging more international travelers to visit Thailand in 2011, she said.

Ms Wanaphapar noted that figures for January through August this year look promising for the upcoming high season.

Occupancy rates over the eight-month period in Phuket averaged about 70%, with a total of 950,936 tourists visiting and spending an average of 40,000 baht each, she said.

The largest numbers of non-Asian travelers came from Sweden, Australia and Finland, respectively.

At the top of the list for Asia were travelers from China, followed by the Middle East and Malaysia.