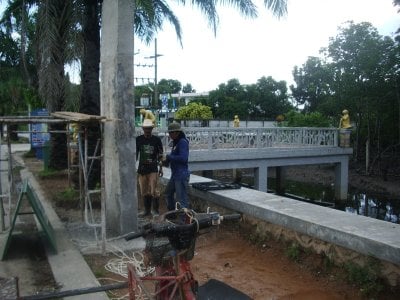 PHUKET: The “monkey viewpoint” being developed on Koh Sireh is costing Rassada Municipality 14 million baht and tenders are now being accepted for a separate 24-million-baht tourism development project at nearby Mali Kaew, also on Koh Sireh.

Rassada Mayor Surathin Leunudom said the 14 million baht is being spent on renovating and extending a footpath along a 750-meter stretch of Srisuthat Road just past the bridge to Koh Sireh.

Plans include improvements in landscaping, drainage along both sides of the road, better lighting and signage – and two large sculptures of monkeys on pedestals.

The seaside mangrove area is a popular spot for locals to visit, “especially in the evening”, Mayor Surathin said.

UMTA Co Ltd began work on the project in April this year and is expected to complete construction in October, he said.

The municipality has also approved a 24-million-baht budget for renovations to the seaside promenade at Mali Kaew Beach on Koh Sireh, which will include construction of new toilets and two food stalls, he added.

“Mali Kaew is another attraction that should be developed, and after waiting for two years, I am very happy to see that this project will go ahead,” he said.