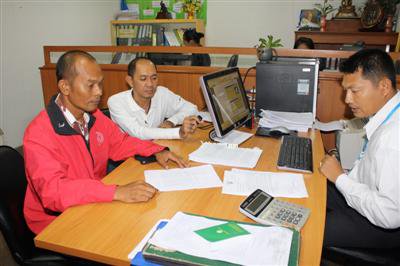 PHUKET CITY: A foreign exchange teller questioned in connection with the theft of 1.8 million baht from a Patong bank claims Kathu Police officers threatened to send him home ‘in a black bag’ unless he confessed to the crime.

Samarn Pul-ied, who spent around 24 hours in custody at Kathu Police Station on November 8 and 9, also claims officers refused to feed him or allow him to call relatives.

“We’re asking the governor for justice,” Acting Captain Thana-satjakorn said. “And Samarn is going to sue any police involved as an example to the others.”

The robbery at the center of the squabble took place at Siam City Bank in the Ocean Shopping Mall on Soi Bangla on the night of November 8.

Around 1.8 million baht in Thai baht and foreign notes was lifted from the safe at the foreign exchange counter, where Mr Samarn has worked for eight years.

Mr Samarn said the bank’s manager, Somchai Denpaibun, called him the following morning and asked him to meet him at the mall for a chat.

When he got there at around 12:30pm he was met by Lt Col Sakon Banditsak and other officers, who asked him to go to Kathu Police Station to be questioned as a witness, he said.

He claims he was detained in the investigation office, where police tried to make him confess to the robbery.

Officers threatened to send him home ‘in a black garbage bag ‘if he refused, he claimed.

Officers also refused to let him call his wife and relatives, he said.

At around midnight, having spent almost 12 hours at the station, he asked for food.

His request was denied and he wasn’t fed until 9am the following day, he said.

He was finally released at 1pm, more than 24 hours after he was first taken to the station.

“The police treated me like a suspect even though they told me I was just being questioned as a witness,” he said. “According to the law, even if I was a suspect they couldn’t deny me my human rights like that.”

Mr Samarn said he would be complaining to Kathu Police Superintendent Grissak Songmoonnark and ‘watching developments every day’.

Col Grissak was quick to defend his men, claiming they were right to question Mr Samarn as a suspect as he was a gambling addict who had recently spent more than 100,000 baht on football bets.

“With his salary you have to wonder how he got that much money,” he said.

Col Grissak admitted Mr Samarn had not been given anything to eat, but claimed the police officers who questioned him didn’t eat either.

The bank manager had asked the police to question Mr Samarn, who was rightfully considered a suspect in the case, Col Grissak said.

“He told the police that the money was stolen by someone else, but the safe isn’t easy to get into. He could have done it himself,” he said.

“Now that he’s complained about the police through the Damrongtham Center, he’s created a situation,” Col Grissak said.

Nevertheless, he didn’t place any undue importance on Mr Samarn as his men had not harmed him in any way.

“His colleagues at the bank also got questioned but they didn’t make any problems,” he said.

Fury over flooding in Patong