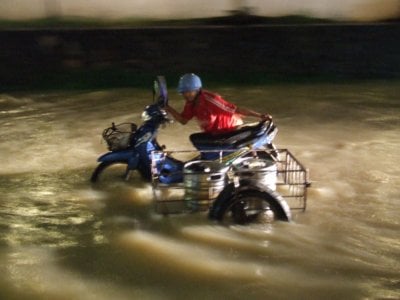 Local residents fed up with the flooding, which they claim has become worse over the past few months, have nicknamed the 50-meter stretch of road ‘Nanai River’.

Several local residents who spoke to the Gazette in May predicted severe flooding in the rainy season.

At that time, residents’ concerns were met with assurances from Patong Municipality that the problem would be solved within three to four months.

Almost seven months later, residents say the flooding is worse than ever, blaming poorly-managed construction projects, inadequate drainage in the area and lack of action from the authorities.

According to Deputy Director of Sanitation at Patong Municipality Teeranun Boonma, rainwater used to drain through the Aroonpat Village estate, through a section of private land and into a canal.

However, the owner of the private land blocked the drains, causing the flooding, he claimed.