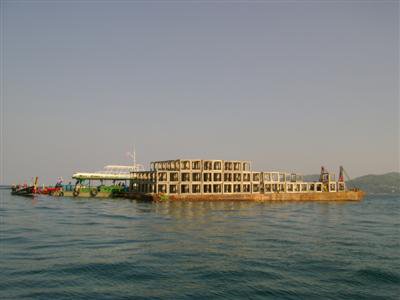 KARON, PHUKET: An artificial coral reef sunk off Phuket’s Karon Beach two years ago is thought to be responsible for a bumper haul of fish caught by local fishermen earlier this month.

Around 400 jacks weighing four to five kilos each were caught in a single day by a small group of fishermen using a local type of net called an ‘uan ple‘ (cradle net) at Karon on November 6.

Pornchai Fai-ngarm, a Karon taxi driver who has fished in waters off Phuket since he was a boy, said he was a member of the group who made the monster catch.

“Eleven of us work together to catch fish using cradle nets whenever we spot schools of fish, normally at dawn or in the evening,” he said.

“This year we started fishing in October until we caught over a tonne of fish on the sixth of the month,” he said.

“There are loads of small shrimp and many kinds of fish around now and it’s all thanks to the artificial reef.”

The reef, which comprises 280 concrete sections, was sunk by the Department of Marine and Coastal Resources (DMCR) in 2007.

Deputy Mayor of Karon Ittiporn Sangkaew said the reef had become home to plankton, which attracted small shrimp to the area. These were in turn eaten by fish such as jacks.

“It’s made the environment abundant like it was in the past,” he said.

He said he had watched the marine environment get progressively more damaged by people using trawls and drift nets to catch fish.

The artificial reef had attracted marine life back to the area, he said.

“We want to set them in a long line along beaches like Kata and Karon,” he said.

“They bring many benefits, such as tonnes of fish and protection from large waves during monsoon season.”

While modern fishing techniques such as trawling can damage coral reefs, cradle nets do not.

Fishing in Karon using cradle nets used to be much more popular. There are now just two groups of fishermen catching fish in this way off Karon, Mr Winai said.

Catching fish using this method was a traditional activity going back a long time, he said.

Nets are laid on the sea bed about 200 meters from the shore whenever large shoals of fish are spotted in the area. When the fish come near the nets, fishermen pull them to the beach, trapping fish inside.

Karon fishermen expect large hauls from now until around April, when the monsoon season typically begins.

Mr Winai warned that hiring Burmese to fish can harm coral, as they often use bottom drift gill nets that are seriously damaging reefs off Phuket.

“We local people are trying to end the problem by cutting their nets, protecting the coral reefs that are home to many kinds of fish,” he said.