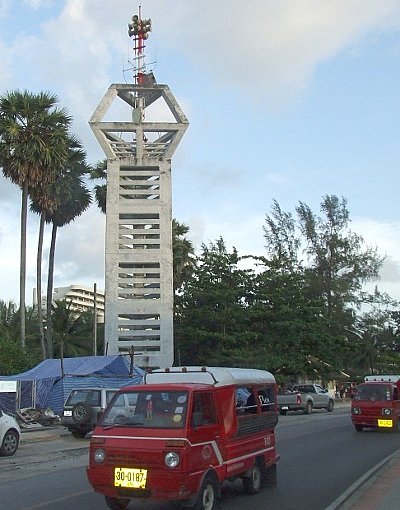 PHUKET: Officials in Bangkok say all 19 tsunami warning towers in Phuket are operational and functioning correctly, yet some local residents say they haven’t heard the sirens sound for months.

The towers are supposed to be tested by playing the national anthem at regularly-scheduled times twice a month.

“Actually, the towers need to be taken care of and need to be cleaned. They are located near to the beach, where they are prone to rust – but they are just being left,” she said.

The other two towers along Patong Beach appear to be operating normally, however.

A lounge chair operator working near the police box at the end of Bangla Road said he heard the anthem played on schedule on May 1, while two motorbike taxi drivers in front of Kalim School confirmed they heard the tower at the nearby Sunset Beach Resort sound at the same time.

Down in Karon, people report hearing a variety of sounds emitted from the tsunami warning tower in front of the Hilton Phuket Arcadia Resort & Spa Hotel, including the sound of crackling static.

Taxi drivers in front of the tower, one of two in Karon, said it had been months since they heard a recognizable noise from the tower.

“The last time we heard the national anthem played from the tower was about two months ago,” said Udomporn Jaipiang, 39.

“Sometimes I hear noises coming from the speakers that sound like an electrical short circuit inside,” he added.

“So we just keep an eye on the sea instead to see if a tsunami is actually coming,” he added.

The other warning tower in Karon, located near Karon Park near the Nong Harn Lake, also appears worse for wear.

“The speaker is rusty. I’ve heard that officials will fix it, but I haven’t seen any of them yet,” said one beach guard.

Despite these accounts, officials deny the warning towers are in need of repair.

San Jantharawong, chief of the Department of Disaster Prevention and Mitigation (DDPM-Phuket) that is responsible for maintaining the towers, told the Gazette, “The warning towers are tested by playing the national anthem on the 1st and 16th of every month.

Chief San added that the National Disaster Warning Center (NDWC), which is responsible for issuing tsunami warnings, has confirmed that all 19 warning towers in the six Andaman provinces were operational.

NDWC Director Somsak Khaosuwan told the Gazette, “We have not received any complaints about the warning towers, which we regularly inspect.”

However, he added that the alarm currently used by the towers sounds the same as an ambulance siren or other emergency vehicle.

“This might confuse people, so we will change the alarm so people will instantly recognize what it is,” he said.

Director Somsak urged anyone who notices a tsunami warning tower in need of repair to report it by calling the NDWC hotline Tel: 192.