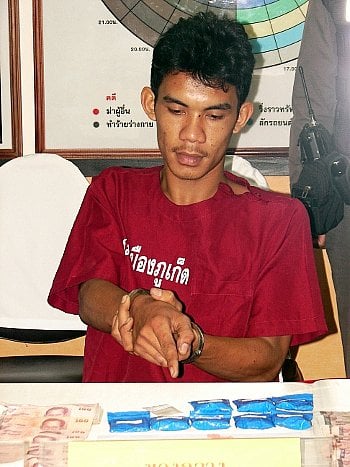 PHUKET: In the latest drug arrest, Phuket City Police last night nabbed a man found in possession of 1,500 ya bah (methamphetamine) pills and a small amount of ya ice (crystal methamphetamine).

Police said Tossapol Maneepakorn, 21, was pulled over at a police checkpoint on Rassadanusorn Road in the Ban Kuku area of Rassada at about 11:30 pm.

As they thought he looked suspicious, police searched his body and motorcycle, finding the drugs inside a brown bag.

Mr Tossapol was arrested and charged with possession of class one drugs with intent to sell.

Mr Tossapol confessed at a press conference this morning that he was on his way to deliver the drugs to a restaurant on Koh Sireh when police stopped him.

He told the press that it was the first time he was hired to deliver drugs.

Had he been successful, a payment of 10,000 baht would have been transferred into his bank account, he claimed.

He now faces a stint in the overcrowded Phuket Provincial Prison, where the majority of inmates are serving time for drug related convictions, most related to ya bah.