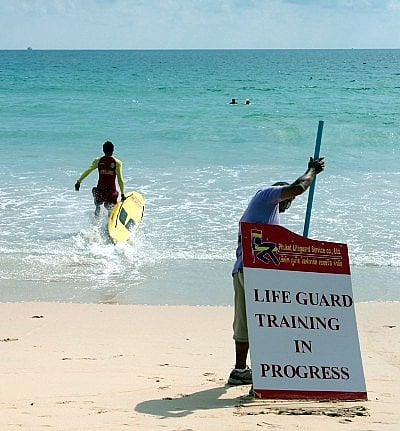 PHUKET: The unveiling of plans for a new lifeguard “education center” at Phuket’s Nai Harn Beach yesterday also saw the announcement of new surf warning signs for tourists and a training program to educate more locals about the dangers of swimming in the sea.

He also explained that the training conducted at the center, to be given by trained lifeguards, will be offered to everyone.

“The center will teach lifesaving skills to anyone – children, adults and tourists – through Thai and English programs.

“Most reported rescues involve Thai swimmers, and most of them were teenagers who sneaked away from their parents to go to the beach. So we will be using the Thai program most,” he said.

Nai Harn was chosen as the location for the center as it already had trained lifeguards who can help, and the lifeguards stationed there had good support from the local community, Mr Prathaiyuth said.

In Phuket on a two-day visit, Simon Farbenbloom, Deputy Head of Mission at the Australian Embassy to Thailand, was impressed by the move to open the center.

“It is my great pleasure to visit this area, which in the not-too-distant future will be transformed into the Phuket Lifesaving Education Center – the first of its kind in Phuket.

Mr Prathaiyuth explained to the visiting diplomat that the project was now waiting only for authorization from OrBorJor President Paiboon Upatising before construction could begin.

“Six to seven surf lifesavers from Australia will arrive to train at the Karon Sea Rescue Center between September 13 and 17, the last day of which will be a skill test carnival,” Mr Prathaiyuth added.

The carnival, last year held on Patong Beach, proved popular in raising awareness of surf lifesaving skills and in developing a healthy respect for the strong rip tides that plague specific locations along Phuket beaches.

Phuket’s convention center, slammed by a report, now on hold