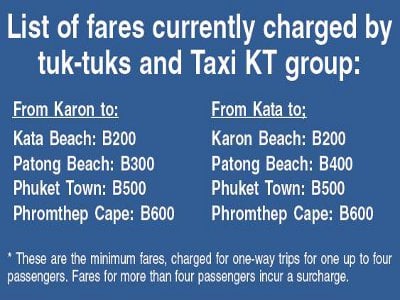 PHUKET: Tuk-tuk drivers in Kata and Karon are stepping up their campaign to have members operating in their areas certified as “safe” and in compliance with a schedule of standard fares.

Certificates, to be issued annually, are meant to assure tourists that they will be treated politely and not overcharged for their ride, said Vice Governor Nivit Aroonrat at a meeting last week.

According to Teerayut Prasertphol, chief of the Phuket Land Transport Office, the criteria for certificates will focus on the condition of the vehicles and the “condition” of the drivers, meaning whether they are polite and dressed appropriately, and in compliance with the rule that standard fares be displayed clearly at each tuk-tuk rank.

Mr Prasertphol says that he hopes the system will encourage all commercial passenger vehicles in Phuket to become registered, even the cars of “black plate” taxi drivers working illegally.

Most of the problems stem from tourists negotiating a fare with the driver and then being asked to pay more than what was agreed when they reach the destination, Chief Teerayut says.

He adds that the new standard fares will differ according to the type of vehicle providing the service, but that the new fares will be used consistently by all tuk-tuk and taxi drivers participating in the campaign.

Also at the meeting was Ponthep Charmkhao, the colorful president of the ‘Tuk-tuk and Taxi Kata-Karon KT’ group. Asked about complaints that his drivers were demanding that resorts pay a “service fee” for them to pick up guests, he said that the drivers were “suffering”.

“We are okay if hotel guests buy package tours and the tour agents provide the transportation by picking up the guests at the hotels, but sometimes a hotel guest will ask our drivers in front of the hotel how much it would cost to go to a certain tourist destination. The guest is then undecided and goes back into the hotel.

“Later, that guest asks a hotel employee to help him and the employee calls a tour agent to get a vehicle to pick him up. We do not like this type of incident.

“Why don’t the hotel staff contact our drivers parked right in front of their hotel?” he asked.

“We don’t want hotel staff to call the tour companies. The staff get a commission for making a phone call and our drivers do not have a monthly salary like they do. We are asking for cooperation from hotel staff to stop that,” he added.