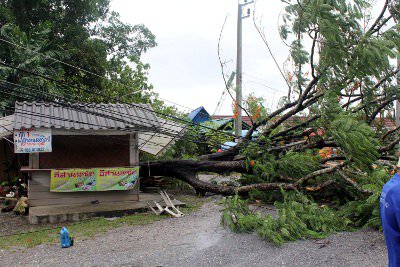 The Thai Meteorological Department (TMD) has issued a flash flood and landslide warning for Phuket, Krabi and Ranong provinces.

Yesterday, thousands of people were evacuated from flood-struck areas in Ranong, while Krabi last night recorded a monster rainfall of 98.0mm.

Chalong Mayor Samran Jindapol told the Phuket Gazette today that his team were focusing on draining water from the road in front of the electricity substation on Chao Fa East Road.

“The water across the road was about 20 centimeters deep. Cars can pass, but we have to be careful. Also, a big tree fell at Chalong Temple. I assigned our team to take care of that as well,” he said.

Power fluctuations continue across the island as emergency crews work to remove fallen trees and branches from overhead power cables.

All small boats are urged to stay ashore as winds whip up waves to three meters in height.

Winds wreaked havoc across Phuket yesterday, blowing down billboards, some of them onto houses.

Emergency workers were called to the Nok Yoong Karaoke (“Flame tree” karaoke) after a large flame tree fell onto power cables and then onto the shop. Power supply to the area was shut down so workers could safely cut away the tree and repair the cables.

About 500 meters away from the Nok Yoong Karaoke on Phra Barami Road, leading up to Patong Hill, a billboard fell onto the house of Ms Sudarat Thongtem, 30.

Ms Sudarat’s mother, Sukon Keeratitaranurak, told the Gazette, “The house was damaged, but luckily nobody was hurt.”

“The company who owns the billboard has contacted their insurance to take care of the damage,” she added.

A further 200 meters away, Wichai Na Nakorn watched as a marquee used to cover his Wichai Used Cars collection blew down, trapping three men underneath.

“The tent was two months old. I was afraid the roof would fall onto the cars, so I asked my men to move the cars out from under it.

“As soon as the cars were moved, the tent collapsed. Three men were stuck inside, but nobody was hurt,” he said.

In Patong, a concerned Patong Hospital Director Dr Phumin Silaphan this morning told the Gazette that his staff were carefully monitoring the rising waters in front of the hospital.

Last year, the hospital generator room flooded, prompting the evacuation of 40 inpatients from the building as a precaution.

This morning, Dr Phumin reported that the road in front of the hospital was covered with water ranging from 20cm to 50cm deep, for about 500 meters along the road.

“We are now monitoring the flood situation. Generally, we are okay. The only problem is that it is not very easy to access the hospital,” Dr Phumin said.

“It looks like the water level is receding. However, we will keep our eyes on it,” he added.