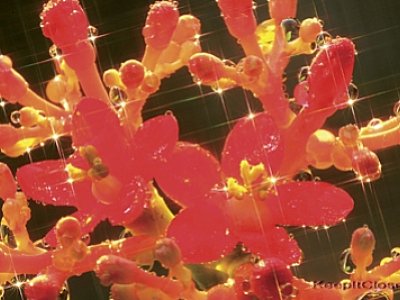 PHUKET: Plants can have bizarre common names, but these names remain in use precisely because they are memorable and refer to a plant’s visible features.

Clitoria ternatea (even the botanical name is – well – suggestive) is called the butterfly pea.

Quesonia has a tall, triangular crown of flowers which gives it the somewhat cryptic label of pagoda plant. Other shrubs, for more obvious reasons, are called scrambled eggs, Jacob’s coat, Christmas candle, or lobster claw.

Take jatropha podagrica. A mouthful in Latin, this red shrub’s popular moniker is bottle plant, or occasionally gout plant. Why? The epithet gives an instant image of a fat, knobbly stem that, on a mature specimen, actually is shaped like a bottle.

No doubt some botanist painfully afflicted with gout decided to give the shrub this second uncompromising name.

Even more bizarre, the physical appearance of a plant or fruit often leads to other associations. Podagrica is also supposed to be good for gout or arthritis, while the folded kernel of a walnut – which bears an uncanny resemblance to the human brain – was believed in the Middle Ages to cure disorders of the mind.

I digress. The ongoing subject is still red flowering shrubs, and the bottle plant fits the bill very nicely. It produces unusual luminous scarlet flowers with yellow centers, no more than a centimeter across.

However, these tiny florets grow in clusters of twenty or more, at the end of long, fleshy stems that protrude above large, ivy-shaped leaves.

This foliage, which in some species is deeply cut with up to eleven narrow lobes, is dark green above and a dull cream below. Bright emerald pea-like seed pods appear at the same time as the flowers, giving the efflorescence a very distinctive appearance. It flowers more-or-less continuously.

A neat shrub, the bottle plant is rarely more than a meter in height and width; it is thus eminently suitable for a container.

Good soil and plenty of moisture are the main requirements. Podagrica does well in filtered shade and can be readily propagated from seeds that turn brown just before they ripen and burst.

Garden centers rarely have the shrub, so beg a few seeds if you know someone who has one. And, lest they explode, let them ripen in an envelope.

A much more common relative is jatropha multifida, though you would hardly think it comes from the same family. Multifida, which has the Thai name of patavia, is a taller shrub with woody stems and smaller ovate or ivy-shaped leaves.

Its conventional flowers are a deep cerise color, about an inch across, and appear in clusters close to the main branches. Easy to find in plant nurseries, it is good for screens, or against a wall. It prefers the freedom of the open garden to the constraints of a pot.

Jatrophas are members of the euphorbia clan: the typical milky and toxic sap oozes from any cut. But the seeds are rich in oil which can be used as a bio-fuel.

Indeed, one variety, curcas, is said to produce four times as much oil per hectare as the soy bean. With this end in view, the railway line from Delhi to Mumbai is lined with jatropha shrubs. Another strange fact about a strange plant.

The chenille plant, or cat’s tail (acalypha hispida), is another “oddball” member of the euphorbia genus. A constant bloomer, its long, catkin-like flowers have the consistency of velvet (hence “chenille”) and hang down like narrow crimson cat’s tails.

Striking and unusual, it is deservedly popular in Thai gardens, and requires little cosseting. It does, however, dislike wet feet and will flower best in full sun.

Tip of the week: Drying herbs

The word herb applies to any plant valued for seasoning, medicine, fragrance or general household use. Many have the Latin word ‘officinalis’ as part of their botanical name. It means “of medicinal value”.

With some herbs, the bulb is used (garlic or onion); with others, the seeds are of primary value (cumin, pepper, chili). Lavender is prized for its tiny scented flowers.

Harvest leaf herbs such as basil or mint when the flowers begin to open and the oils are at their most concentrated. Cut sprigs or branches, tie them together at the cut ends and hang them upside-down out of direct sunlight.

When the leaves are crisp and crumble easily, strip them from the stems and put them in airtight jars to preserve the aroma..